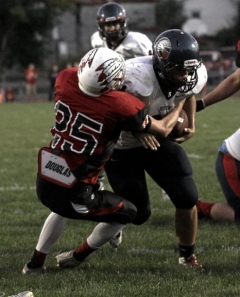 The Sayre Redskins ran roughshod over an outmanned Canton Warriors team for a 42-8 victory at Miller Moyer Memorial Field in Canton last night.

It took the Redskins only 49 seconds to get on the scoreboard, as junior running back Tyler Belles would rumble 73 yards on the second play from scrimmage to put Sayre up 6-0. He would also tack on his first of four two-point conversions on the night, and it was 8-0 with 11:11 remaining in the first.

Canton's first attempt on offense would end in an interception by Daniel Rumsey who returned it to the Warrior 31. Their defense would hold, and Sayre gave the ball back on downs.

The Warriors quickly committed their secondly costly mistake. A bad snap on a 4th down punt attempt gave the Redskins the ball on the 32. They would need only six plays to cover the distance, with Garrett Weaver taking it in from seven yards out. Belles added his second two-point run and Sayre led 16-0 at 1:24 of the first.

Following another Canton three-and-out, Sayre would drive 53 yards in eight plays, capped by a 4-yard TD run by Jacob Goodrich. The two-point try made it 24-0 with 10:23 till the half.

Both teams then traded punts before Canton got on the board, with Ridge Moore completing a short pass to Gavin Hoffman, who turned and ran it 28 yards for the score. A Moore to Bryce Cole pass was successful for two points and the score stood 24-8 with 3:45 left.

Sayre was not finished, as a Gavin Lundy-McCutchen to Marshall Felt bomb of 53 yards made the score 32-8 as both teams went into the locker room for halftime.

The third quarter saw some uninspired play from both squads, as they combined for five turnovers and six penalties. Sayre would eventually get untracked, hitting on a Mitchel Ward 25-yard field goal to make it 35-8.

Tyler Belles led all rushers with 112 yards on nine carries with one touchdown. Garret Weaver added 42 yards and a score on 11 carries. Lundy-McCutchen was 4-for-7 for 123 yards and a score, while Marshall Felt caught all four passes for Sayre.

Canton was led by Gavin Hoffman's 14 rushes for 57 yards, while Moore completed 10 passes for 63 yards and a score.

Next week Sayre travels to Troy, while Canton travels to South Williamsport.