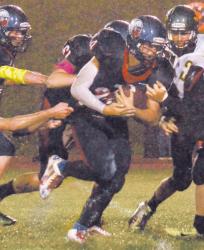 SAYRE - The Sayre Redskins, led by Garrett Weaver (176 yards on 12 carries), bested the Rams by the score of 54-8 on Homecoming.

CMVT started the game on a 10-play drive that ended when Trent Longenberger's fourthdown pass fell incomplete at the 25-yard line.

Sayre only needed three plays to get into the end zone with Michael Ward's 20-yard scamper with seven minutes left in the first quarter. The extra point was blocked, making the score 6-0.

On the next possession, Chris Ray intercepted the Trevor Welsh attempt and ran down the visitor side sideline 68 yards to paydirt. Tylor Belles ran in the two-point conversion to make the score 14-0.

The Rams next possession lasted 14 plays only to have CMVT forced to punt, but the snap sailed over the punters head giving the ball back to the Redskins at their 41-yard line.

Weaver took the handoff and ran up the middle of the Rams defense for the score. Ward added the two-point conversion to make the score 22-0, early in the second quarter.

After a Rams punt, Sayre went seven plays only to have a bad exchange between the center and quarterback. Mason Toth recovered the loose pigskin for CMVT.

The Rams needed only five plays to get on the scoreboard. Welsh sneaked in from two yards out. CMVT went for two and Welsh hit Duncan Heidler to make the 22-8 with three minutes left in the half.

Sayre started at their 46-yard line and went 54 yards on six plays. Weaver scored from 15 yards out with 1:36 left and Belles ran for the two-point conversion to make the score 30-8 at the half.

The Redskins, starting at the ten-yard line, went 90 yards on nine plays, thanks to the running of Weaver and William Hudock. Ward then rumbled in from three yards out. The two-point conversion failed making the score 36-8.

The next Rams possession ended with a punt. Marshall Felt returned the punt for 34 yards to the nine-yard line, and three plays later Gavin McCutcheon snuck in from the two. The extra point failed making the score 42-8 with 4:08 left in the third quarter.

After a Rams punt, the Skins ran four plays and Felt went six yards to paydirt with two seconds left in the third quarter. The two-point conversion failed making the score 48- 8.

The Rams fumbled the ball on their next possession, recovered by Jakeb Ressler. Sayre put in the JV team and Nate Garrity found the end zone after a eight-play drive. The two point conversion failed to make the score 54-8.

CMVT fumbled the ball on their next possession , it was recovered by Devin Ervin, and Sayre ran out the clock for the victory.