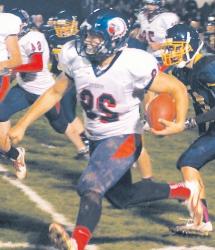 WESTFIELD — In a classic case of slash and dash versus ground and pound, the latter prevailed as Sayre defeated Cowanesque Valley by a 32-21 score. The Redskins adjusted and wore down the Indians to even their record at 3-3 while the Indians fall to 2-4.

The first quarter began and finished with neither defense stopping the opposing offense. Both teams scored on their first two possessions, starting the second quarter with a 14-14 deadlock.

Sayre, in their first series, put together a 14-play drive with Michael Ward and Garrett Weaver picking up the bulk of the carries, combining for 59 yards on 12 carries. When Tylor Belles took his first handoff, he made the most of it, rumbling in from 10 yards for the score. Mitchell Ward added the extra point for a 7-0 lead.

The Indians answered on a big-play drive with Colton Vinluan scampering for 15 yards and Connor Calaman stretching out the defense with runs of 15, 11 and 29 yards with the last one going for a touchdown.

Once again, CV answered with Calaman. He carried the ball six times for 60 yards with a run of 27 yards and a touchdown run of 17 yards on the first play of the second quarter. The runs gave Calaman 105 yards in basically a quarter of play.

The Indians tied the score on a wild two-point conversion when Vinluan took the ball around the home field side. As Redskin tacklers engulfed him, he pitched the ball blindly over his shoulder to Joey Brown, who scored.

Both defenses came up big on the next two series. Both offenses went for it on fourth down and the defenses held tough. The Redskins seemed to have an answer for Calaman now.

"We adjusted on defense. We widened our defense," said Sayre coach Stephen Satterly, "and we put quicker guys on the outside."

The only scoring in the half after the early offensive explosion came from the Redskins' defense. Vinluan dropped back to pass and felt pressure from the Sayre pass rushers. He attempted a quick throw to avoid the sack, but the ball flipped into the arms of Patrick McDonnell. He ran 38 yards for the pick six and a 20-14 halftime lead.

Calaman's struggles continued into the second half as he fumbled the opening kickoff, but the Redskins could not capitalize on the opportunity.

On their next series, Sayre went to the ol’ ground and pound with the offensive line moving the pile.

After an eight-yard surge by Ward, Marshall Felt came off the field and said, "That's a lot of meat out there." He was referring to the big backs — Weaver, Belles and Ward — plus the offensive line that included Phillip Hall, Brandon Paris, Craig McCutcheon and McConnell.

Belles capped the drive with a 43-yard run through the Indians' defense for a 26-14 lead with just over five minutes left in the third.

Cowanesque Valley scored on the first play of the fourth quarter on a five-yard run by Calaman. A pass interference call and a facemask call aided the Indians. The Joey Brown PAT closed the Redskin lead to five points.

However, on their first play from scrimmage, Weaver set the tone for the rest of the game with a 24-yard gain that left a wake of would-be tacklers on the ground as he broke six tackles. The Redskins fed CV a steady diet of Weaver, Ward and Belles before Ward scored on a three-yard run for the 32-21 final tally.

Calaman finished with 132 yards on the ground after 105 yards rushing in roughly a quarter.

Weaver finished with 29 carries for 178 yards and Ward going for 86 yards on 16 carries. Belles added 110 on just eight carries. That’s ground and pound.

"This is a good step," Satterly said. "It proves that we can win close games. I'm proud of our kids."