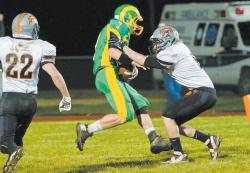 "It was a good effort, I'm excited for the kids. It's been too many years since we’ve had the trophy," said Ram Head Coach Frank Kinney afterward. The Wyalusing players took turns posing for pictures with the trophy that hasn’t been in their possession since 2002.

The game appeared evenly matched early on as both teams had some success moving the ball but traded punts. The first big break of the game would go to the Rams as Isaac Bennett intercepted a Brandon McLinko pass at the 22 yard line. From there, the Rams would need only four plays to go the distance, with Derek Frederick hitting Ryan Kipp for the 10-yard score. Derek Clark would add the two-point run, and they led 8-0 with :28 left in the opening quarter.

The Rams' second score was set up by another interception, this one by Frederick at the 36-yard line. He would follow it up with his second scoring strike, a 36-yard bomb to Collin Edsell. Frederick would add to the lead by completing the two-point pass to Luke Jennings to make it 16-0 with 25 seconds left until the half.

The Towanda offense came alive, taking the ensuing kick return to their 39. From there McLinko connected on consecutive passes, 20 yards to Kaleb Benjamin, and 16 yards to Steven Yates. Add on a 15-yard late hit penalty, and Towanda had first-and-10 at the 12 yard line. From there, Tyler Basse connected on a 30-yard field goal to cut the lead to 16-3 as the first half expired.

The Black Knights would continue that momentum into the second half, as they traveled 52 yards in eight plays, with Keegan Kisner scoring from 4 yards out. Basse's extra point would make it 16-10 with 8:10 left in the 3rd quarter.

But from there it was all Wyalusing, as the Rams' running attack took over. They ground out 86 yards on 10 carries with Ryan Kipp scoring from 3 yards out. Again, the two-point conversion throw was complete, and the lead stretched to 24- 10 with 3:10 left.

Isaac Bennett would follow with his second pick of the night, setting up the next drive on the Towanda 29. Three plays later Luke Jennings rumbled 15 yards for the score, and the two-point conversion throw made it 32-10 with 11:53 left.

Four straight McLinko incompletions gave the Rams the ball right back, and Jennings would cover all 53 yards himself. A 9-yard first down carry was followed up by a 44-yard burst up the middle for his second score on the night. Yet another successful point after completion made it 40- 10 with 10:36 left.

With the game out of reach, the Rams would add one final tally, a 25-yard run by Jennings. The extra point failed, and the final score was set at 46-10.

Luke Jennings finished his storied career with 152 yards rushing and three touchdowns in his final game. Derek Clark would add 64 yards on 15 carries, while Derek Frederick threw for two scores.

Keegan Kisner led Towanda with 10 carries for 53 yards and a score.

Wyalusing ends the regular season with a 5-5 record while Towanda went 2-8 on the year.