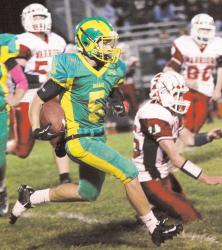 WYALUSING - The Wyalusing Rams reeled in an easy 59-6 homecoming win over the Canton Warriors last night under the lights at Peterson Stadium.

The Warrior defense was no match for Collin Edsell and the home team offense, who would get the ball rolling early on in the first quarter. Edsell would provide a key 22-yard carry on 2nd-and-6 to set the Rams up at the Canton 31-yard line, where Derrick Clark would toss in another nine yards. Although a flag on Wyalusing's ensuing play would back them up five yards, another carry from Edsell would bring the Rams to the 6-yard line, and from here, quarterback Derek Frederick would easily run in the short distance to the end zone for the touchdown with 9:36 remaining in the first quarter. Frederick would pitch the ball to Luke Jennings for the twopoint conversion, and the Rams would go up, 8-0.

Wyalusing would then set up to kick off, the ball bouncing off a Canton player, allowing the Rams to gain possession again at the 20-yard line, and they would waste no time pulling even farther ahead of the visiting team. With 8:06 left in the first, on 3rd-and-1, Luke Jennings would cover the 11-yard distance into the end zone for the touchdown. This time, Collin Edsell would complete the two-point conversion, and the Rams would continue to lead, 16-0.

Canton's first possession of the game would, unfortunately for them, be advantageous to the Rams; a Ridge Moore pass on 3rd-and-13 would be intercepted by Frederick, giving the Rams the ball at the Canton 26.

For their third score on the night, the Rams would use their passing offense to get the job done. After two consecutive runs from Jennings and Edsell, Wyalusing would have the ball on the Canton 22, where Derek Frederick would complete a pass to a wide open Jon Morrison for the six points. Ryan Kipp's extra point was true, and the Rams extended their lead, 24-0.

An eight-play drive and seven lost yards on Canton’s following possession would also provide an opportunity for Wyalusing to score yet again. On 4th-and-15, the Warriors would be forced to punt to Jennings and Edsell set up in the backfield. Edsell would receive the punt, and race past defenders 80 yards into the end zone for the touchdown. Again, Kipp's extra point was good, the scoreboard reading 32-0.

When it didn't seem like the Rams would find another way to score off the visiting team's mistakes, they did. On 4th-and-7 at their own 49, Canton quarterback Ridge Moore would throw an interception into the hands of Wyalusing's Carl Gowin, who would scamper 51 yards for the score with 11:47 remaining in the half. Kipp's PAT was again true, and the Rams led, 39-0.

Wyalusing would score again on an easy, one-play drive, Frederick handing the ball to Jennings, who would push through multiple defenders to cover the 51-yard distance needed for the touchdown. Ryan Kipp would add the extra point, the scoreboard reading 46-0 with just under 10 minutes to play in the first half.

The Warriors would work some magic to finally put themselves up on the scoreboard on a 16-play drive following the Ram touchdown. On 1st-and-goal at the Wyalusing 1-yard line, junior Gavin Hoffman would push his way into the end zone for Canton's first and only touchdown on the night. Moore's attempt at a two-point conversion pass would fall incomplete, and the Warriors would still trail, 46-6 with two and a half minutes remaining in the second quarter.

The second half of play would bring with it the running clock. With four and a half minutes gone, the Rams would again score with the same fire they started with in quarter one. Luke Jennings would complete the 7-yard scamper into the end zone, and Ryan Kipp's PAT would fall short, bringing the score up to 52-6.

Canton would be forced to punt on their next drive, ending the third quarter. On their final scoring drive, the Rams would change up the offensive line a bit, giving sophomore Calvin Burke the quarterback position. Sixteen carries from various new faces would set the home team up at their own 1-yard line, and Luke Minturn would cross into the end zone for the touchdown, setting the final score of the night at 59-6.

Next week, Wyalusing travels to Danville to take on the Ironmen and Canton travels to Bucktail.