North Penn pulls away from Canton. 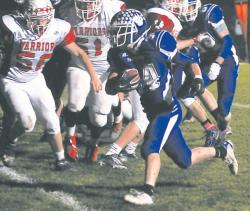 BLOSSBURG — The North Penn-Mansfield Panthers controlled both sides of the football in a dominating 44-8 victory over the visiting Canton Warriors.

The Warriors had no answer for the Panther offense led by quarterback Brock Burleigh. Burleigh had his way all evening long as he threw for 193 yards and two touchdowns going 12-for-22. He also added 46 yards on the ground.

Bradley Pequignot led the rushing attack for the hosting Panthers carrying the football 11 times for 28 yards but added two scores of his own, both from within the Panthers' own 2-yard line.

Nick Kasper led all receivers with five receptions totaling 84 yards and was on the receiving end of one of Burleigh's two touchdowns. Garrett Bickhart had the other receiving touchdown adding three receptions of his own and 80 yards receiving.

The Canton offense relied heavily on the running game. Gavin Hoffman recorded the majority of the carries, rushing the football 22 times for 95 yards and scored the single Canton touchdown of the game. James Bowman added 14 carries for another 71 rushing yards.

Things did not look good for the visitors early in the game.

After forcing North Penn-Mansfield to turn the ball over on downs on the opening drive of the football game, the Warriors would look to put the first points up on the scoreboard.

That was until the Panther defense forced Canton to a three-and-out and were waiting to receive the punt.

Backed up into their own end zone, the Warriors looked to punt the ball away but the punt was blocked by Randy Martin of North Penn-Mansfield as the ball went out of the back of the end zone for a safety and the Panthers jumped out to a 2-0 lead.

The Warriors were then forced to punt the ball to the Panthers following the safety and it was soon after the punt that North Penn would add to their early lead.

The Warriors held the Panthers to a fourth-and-6 but that was quickly erased after Burleigh tucked the ball and took it himself for a 30-yard rush. Pequignot would cap off the drive with a two-yard rushing touchdown. The two-point attempt failed to be converted and the Panthers led 8-0 halfway through the opening quarter.

Canton would be quick to respond following the Panther touchdown.

After a decent return by the Warrior return man, the Warriors took the field starting at midfield. The 50-yard, 10-play drive was capped off by a 1-yard touchdown rumble by Hoffman as he would record the lone score for the Warriors on the game. Quarterback Ridge Moore rushed the ball in himself on the two-point conversion.

The score was tied 8-8 after the first quarter of play.

The tie score was short-lived as the Panthers would find the end zone on their first drive of the second quarter. Lined up on their own 11, they tossed the ball to Mason Gee who would hit the left side corner on his way for the touchdown. Burleigh would then connect with Joel Whittekar over the middle to convert the two-point attempt.

The Panther defense would hold true on the next Canton possession, forcing them to turn the ball over on downs.

It then took just one play for Burleigh to connect with Bickhart down the sideline who made the reception as the defender slipped. Bickhart would go 64 yards untouched into the end zone. The twopoint attempt was failed.

Both teams would struggle out of the gate following the intermission as both teams exchanged three-and-outs.

The Panther defense would come through again and force the Warriors to a second straight three-and-out to start the second half of play.

North Penn-Mansfield would then add onto their lead. Again, it was Pequignot who would punch it in from 1 yard out for the touchdown. Burleigh connected with Kasper for the two-point conversion.

Canton was then forced to a third straight three-and-out and punted the ball away. Judson Wise fielded the punt, slipped past two Warriors, hit the corner, and would make a few defenders miss as he broke a few more tackles on his way into the end zone for a punt return for a touchdown. Don Edwards tacked on the twopoint conversion.

On the Warriors' next drive, Moore would put the ball on the ground as Aaron White of the Panthers would recover the loose ball.

North Penn-Mansfield would capitalize on the turnover and would add another score. This time it was a Burleigh to Kasper connection for 37 yards. The Panthers led 44-8 heading into the final quarter.

The fourth quarter showed no scoring as the Panthers would win the game with the final score of 44-8.

North Penn-Mansfield advances to 4-4 on the season with the victory and will prepare to travel to take on Wyalusing next Friday evening.

Canton falls to 3-5 on the season and will look to bounce back next week as they travel to Cowanesque Valley.