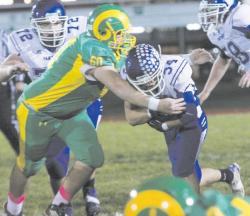 This week 9 match-up with playoff implications for both teams looked more like an early pre-season event filled with turnovers, penalties, and lackluster play.

The Rams' offense fumbled the ball away five times, threw two interceptions, had 10 plays with negative yardage, and four penalties for -35 yards.

North Penn was called for six penalties for -75 yards, threw one interception and 12 incompletions, and had three fumbles including one in their own end zone for a safety.

In the end, the Panthers' passing game did enough to come away with the victory.

The Rams opening drive would end with a bad snap on a fourth-and-8 punt attempt. Derek Frederick's attempt to run was short of the first down, but a Panther late hit penalty set them up on their 34 yard line. A quick three-and-out gave the Rams the ball back on their 29, where Luke Jennings fumbled it right back on a first down carry. For the remainder of the first quarter both teams traded fumbles and punts, before the Panthers got on the board. Starting on the 48, they would mix short runs and passes to move to the Ram 30, where on fourth-and-13, quarterback Brock Burleigh hit Shawn Giles with a short screen pass that he raced 30 yards to the end zone. Burleigh would add the two-point run as the Panthers took the 8-0 lead with 7:31 left in the first half.

The Rams responded by driving from their own 39 to the North Penn 14 before stalling on downs.

The second half saw the teams trade punts, before the Rams would capitalize on a fumble by RB Mason Gee. On second down, Luke Jennings would break free off the left side and out race the defense 49 yards for a touchdown. The two-point conversion run failed, and the North Penn lead was cut to 8-6 with 5:17 left in the third.

North Penn would increase their lead following a Jennings fumble, as Burleigh hit Joel Whittaker with a 46-yard scoring pass to make it 14-6 at 1:25.

Following an interception of backup quarterback Derek Frederick, the Panthers closed out their scoring as Burleigh called his own number from a yard out and walked into the end zone untouched. He would add the two-point conversion run, and at 8:18 they led 22-6.

The Rams would add a late safety as Burleigh recovered a fumble in his own end zone to make the final 22-8.

Burleigh finished 17-for-30 for 194 yards and two touchdowns with one interception.

Jennings led Wyalusing with 132 yards on 17 carries and one score.

Next week both teams end the regular season against their rivals, with Wyalusing hosting the Towanda Black Knights, and North Penn taking on Wellsboro.