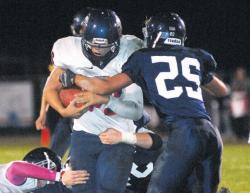 MUNCY — Sayre and Muncy both entered Friday night’s game with 3-3 records and ranked second and third, respectively, in the District 4 Class A playoff standings, just a few points apart from each other. For those reasons, a close game would be about what one might have expected with teams so evenly matched.

That was exactly what occurred and in such games, it often ends up being small things that make a difference and this game was no exception. In the end, it was Sayre who made a couple mistakes too many and that was the difference in a 24- 14 loss to Muncy.

"Muncy made more plays than we did," said Sayre coach Steven Satterly. "They tackled very well and were able to adjust to what we were doing. We had some success running the ball but you've got to stay ahead of the chains as best you can and tonight we didn't do that."

The Redskins muffed a punt early in the game and Muncy turned it into seven points and did not have a turnover while Sayre finished with two. Sayre also hurt itself with some penalties at inopportune times as it compiled 80 yards of penalties, including one in the second half that knocked it out of the red zone. The Redskins also failed to convert two red zone chances into points while Muncy came away with points on three of its four red zone chances.

"Our overall execution and emotion was the difference tonight," said Muncy coach Sean Tetreault. "Both teams were very physical up front. Sayre played a great game and our kids just executed their assignments and came out fired up and ready to play."

Garrett Weaver was a workhorse for Sayre as he ran 27 times for 114 yards and a score. Michael Ward also picked up 59 yards on 11 carries and Sayre did not pass the ball until the second half. The Redskins had more first downs than Muncy (18-16) but the mistakes proved to be too much to overcome.

After Muncy received the opening kickoff, Sayre forced Muncy to punt from its own 36-yard line. The punt bounced off the turf once and off the shoulder pads of Christopher Ray as he tried to field it and it bounced five yards in front of him, where Muncy recovered at the Sayre 46. After a 14-yard run by Cameron Good, Coleman Good hit Jeff Fry for a 32-yard touchdown pass to put Muncy up 7-0.

The Redskins then put together a 13- play drive that went nearly 60 yards and took over six minutes before being stalled at the Muncy 11 on a fourth-and-three play. Muncy took over but went three-and-out and Sayre was able to put together another long drive of 11 plays and 44 yards and this time finished as Weaver’s nine-yard run tied the score 7-7 midway through the second quarter.

Muncy answered right back on its ensuing possession, however, as it was aided by a 15-yard pass interference penalty on the first play from scrimmage. From there, it needed just five plays to get back in the end zone as Coleman Good capped the drive with a one-yard touchdown run. A 27-yard connection from Good to Abien Berry one play earlier set up Good's scoring run.

The Indians forced a Sayre punt on the ensuing possession and then were able to drive down to the Sayre 4-yard line to set up Chris Titman for a 22-yard field goal as time expired in the first half to take a 10- point lead. A 22-yard run by Cameron Good set the Indians up in field goal range as it moved Muncy from the Sayre 39 to the Sayre 17 with under a minute to play in the half.

Sayre put together another long drive that spanned nearly half of the third quarter after it received the second half kickoff. It featured a fourth-down conversion from the Muncy 35 and ended with Gavin Lundy-McCutcheon's one-yard run for the score to pull the Redskins within three at 17-14.

Muncy then failed to take advantage of good field position to start its next drive as it produced just three yards and punted. Sayre took possession at its own 26 late in the third quarter but flipped field position on a 40-yard reception by Ray on Sayre's first pass attempt of the night. The Redskins got to the Muncy 17 but following an incomplete pass on second down, an unsportsmanlike conduct penalty pushed them back to the 32 and they eventually turned it over on downs.

"Unfortunately, in a game like this, you're going to lose your head but they have to learn to not let that bother them and that falls on me for them being overemotional," said Satterly about the penalties. "But, I wasn't too happy with the penalties."

A big defensive stop by Sayre on a fourth down play from the Sayre 14 stopped a long 13-play Muncy drive that lasted 7:31 but the Redskins only managed 10 yards on their ensuing drive and were forced to punt to Berry, who returned it 19 yards to give Muncy possession at the Sayre 40 with 3:41 remaining.

From there, Cameron Good was responsible for five rushes for 38 yards in a seven-play drive and capped it with his game-sealing touchdown with 1:40 remaining.