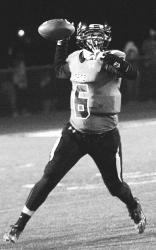 ATHENS — A handful of missed opportunities and a lack of answers for the Montoursville Warriors' packed arsenal of weapons saw the Athens Wildcats’ district hopes flutter and fade in a 38-14 loss Friday night in the District 4 Class AA semifinal.

"We had some opportunities," Athens coach Jack Young said. "Our kids kept fighting, this hurts ... I told them I would go to battle with anybody, anywhere with them."

The first drive of the game would be the tale of the tape for the second-seeded Wildcats' offense, after a nine-play, 52-yard drive stalled at the 14 yard line with a missed field goal.

"The opening drive, we couldn't have scripted it any better," Young said. "Other than getting the ball into the end zone or kicking it and making it."

After trading punts however, Luke Newman recorded the strip sack for the 'Cats, setting up a first-and-goal from the Montoursville 14, a possession that would end on a 3-yard touchdown run by Aaron Barry for the early lead.

The high of an early lead would be brought down on the ensuing kickoff, as Montoursville's Tom Shea split the kick coverage team and evened the score with an 89-yard return with 1:42 to play in the first half. An uncharacteristic play, according to Young, that turned the early tide in favor of the visitors. Third-seed Montoursville would take its first lead midway through the second quarter, with quarterback Brycen Mussina connecting with Keith Batkowski out of the backfield for a 73-yard touchdown.

Mussina had a proficient night for Montoursville, hitting 13-of-18 passes for 264 yards.

"I just think hanging in there and getting our pass protection correct (changed things)," Montoursville coach JC Keefer said. "We felt like we could throw the ball tonight ... Our defense played outstanding, I think those two things were the bottom line."

Led by Mussina, the big, game changing plays would continue to evade the usually explosive 'Cats and fall into the lap of Montoursville.

Athens playmaker Kalen Keathley got touches throughout the first half — grabbing six Barry passes for 87 yards at the break — but the big momentum-swinging play that Young and company longed for never came.

Meanwhile Montoursville tacked on another score, this one a Mussina-to-Shea 22-yard play to send the 'Cats into the half with a 21-7 deficit.

"We didn't have that big play, they were sitting back (defensively) so we had to hit some underneath stuff," Young said. "A defense's goal a lot of times is no big plays, and they did a good job on eliminating those big plays."

"He's going to catch the ball, we wanted to try to keep him from getting that big game and we did that," Keefer said of Keathley.

Montoursville extended its lead on the opening drive of the second half, and after an Athens' three-and-out the Warriors tacked on a field goal to extend the lead to 31-7 with time dwindling in the third frame.

The 'Cats would rally, one final push to open the fourth quarter ended with Zack Jayne scoring on the ground from 4 yards out. Austin Lister's second extra point of the game gave a glimmer of hope with a 31-14 hole to climb out of with 8:24 left in the game.

The glimmer would be short-lived as Montoursville went back to its playmakers to seal the game after recovering the onside kick, with Batkowski storming to a 48- yard score to bring the game to its final at 38-14 with 7:43 left to play.

Batkowski finished the game with 214 all-purpose yards to lead an athletic display by Montoursville.

"One of the things that worried me about them was that they're very athletic," Young said. "From the backs to the linebackers to the guys up front."

For Athens, Keathley finished the night with 11 catches for 154 yards. Zack Jayne carried 15 times for 54 yards and a score.

Montoursville (9-3) will head to Southern Columbia for the district championship game Friday. Athens finishes the season 10-2.