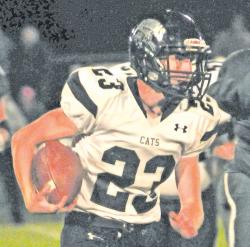 WELLSBORO - If legendary broadcaster Keith Jackson had been announcing the game Friday, there would be no doubt that he would have said, "Whoa, Nellie, we've got a barn burner brewing!"

That's exactly what happened as Athens edged Wellsboro in the closing seconds for a 27-26 inspiring victory and knocking the Hornets from the undefeated ranks.

"Two weeks ago," Athens' coach Jack Young said, "I think it was after our loss. Someone asked me what I liked about this team and I said, 'I think it's character. That can go a long way.'"

The Wildcats trailed in the first half 14-7, but went into the halftime locker room with a 20-14 lead. It was the Green Hornets who showed their character at the start of the second half.

On their first defensive series, Wellsboro's Quinn Henry picked off Aaron Barry and returned the ball 30 yards. A personal foul at the end of the play gave the Hornets the ball on Athens' 30-yard line.

Three plays later, Henry stared down one of his favorite receivers, Chase Moser, in the flat to draw in the defense before throwing deep to wide out Johnny Rowland for a 29-yard score. Nic Ingerick missed the extra point, keeping the game tied.

Kalen Keathley returned the kickoff to midfield, but Athens failed to capitalize. Parker Jones sacked Barry for a 14-yard loss and a short punt gave Wellsboro the ball at midfield.

The Mighty Quinn called his number three straight times, picking up three, five, and 25 yards. A late hit by Zach Sheppeck on the long run added another 15 yards. Quinn then when to the air, hitting Jones for 18 yards and then Moser for a 3-yard touchdown strike.

Wellsboro missed the extra point, but a personal foul on Athens gave the Green Hornets another chance. The Wildcats came up big and blocked the second try.

The end of the third quarter and beginning of the fourth were marked by long, fruitless drives. Athens put together an 11-play drive that ended on Wellsboro's 19-yard line after Barry failed to connect with Keathley on fourth down.

The Green Hornets then took possession of the ball on 14-play drive that lasted over 10 minutes. The Wildcats aided Wellsboro with a third down pass interference and a personal foul call.

Sheppeck broke up a pass play on fourth down, redeeming himself for an earlier misstep, and Athens took over on their own 10-yard line with 4:11 left to play.

"We hung in there and had a big defensive stop," Young said. "That's character."

"I knew we had a chance," Barry said when the offense took the field.

The Wildcats then moved methodically downfield on a 13-play drive. Big plays came when Barry found Bill Bennett open for a 22-yard gain and Keathley gained 15 yards on an end around.

After a couple short gains on the ground by Erik Karlsson, Barry found Austin Lister for six yards and Keathley for 19 yards. Two runs then netted 13 yards and gave Athens the ball on the six.

With 32 seconds left, Barry found Bennett for the game winner in another redeeming moment. Bennett let a fourth down pass from Barry slip through his hands in the end zone to stop a drive in the first half.

"I had total confidence," Barry said. "I knew we were going to come out on top."

Lister added the extra point for the 27-26 final tally.

"The only problem," Young said, "we left 32 seconds on the clock for Henry. He's a talented player with a lot of ball left ahead of him."

Henry, a sophomore, completed 8-19 passes for 184 yards and two touchdowns. He also added 52 yards on the ground.

However, the Wildcats had an answer when Lister sealed the game with an interception. In addition to his big INT, Lister had four receptions for 72 yards.

"That's just guts and character," Young said, reiterating his previous thoughts. "We hung in there."

The Green Hornets jumped out to an early 7-0 lead. After Henry hit Jones on a 68-yard gain, Moser scampered for a 15-yard score.

Athens answered when Barry found Lister on consecutive plays for 11 and 43 yards. Then Peyton Lewis scored a 3-yard run to tie the game at seven.

Wellsboro scored at the end of the first quarter when Henry took the ball on a quarterback draw up the gut. The drive was kept alive by a pass interference call and 48-yard pass-and-catch from Henry to Nick Tremper.

Keathley tore up Wellsboro all night on returns with his best coming midway through the second quarter when he was tackled at the Hornets' six. Lewis scored after an offsides call. Lister added the extra point to tie the game.

Just before the half, Barry scored from a yard out for the 20-14 halftime lead. On the night, Barry passed for 182 yards and had a touchdown in the air as well.

The word for the night? Character.

Both teams now carry a 4-1 record. Athens travels to Towanda next week while Wellsboro travels to Troy.