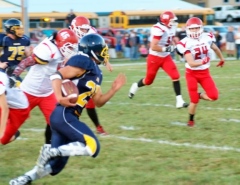 WESTFIELD - In a wild shootout between Cowanesque Valley and Troy, no one lost. It just happened that the Indians ran out of time as the Trojans edged the Indians 35-34 when Collin Binford connected on a 27-yard field goal with four seconds left on the clock.

Even more impressive was that Binford - a two-sport athlete - scored four goals in a soccer game at Sayre earlier in the evening.

Cowanesque Valley scored on the last play of the first half, foreshadowing the end of the game. After recovering a Troy fumble, the Indians marched 63 yards with most of the yardage coming on a 52-yard pass play from Colton Vinluan to Joey Brown. Three plays later, Vinluan scrambled and pump faked before finding Connor Calaman in the corner of the end zone to narrow the Troy lead to 20-12.

Starting the second half, CV put together a 12-play drive that reached the Troy 12-yard line and ended with a Calaman fumble that Nate Swain recovered. Three plays later, Troy fumbled and the Indians were back in business.

Going to the air, Vinluan found Casey McLaughlin wide open at the goal line. On a controversial conversion, Vinluan rolled left and apparently fumbled the ball. Joey Brown recovered the ball to tie the game.

Fired up, the Trojans returned to their ground game and needed only six plays to take the lead again. Tristan Drake carried the ball twice for 45 yards and Cody Ercolino added 21 yards on two carries before he scored on a 1-yard plunge. The conversion failed.

The battered Troy defense - with over half of their starters injured and off the field - held CV and forced them to punt. The Indians returned the favor and stopped the Trojans on fourth down shy of midfield.

Once again, Vinluan found Joey Brown for a 28-yard gain and a facemask infraction added more yardage onto the play. Vinluan then called his number three times for a 6-yard gain to the 1 and then on a sneak play for the score before taking the ball on a sweep for the conversion and a 28-26 lead.

On the kick return, Kurtis Roupp brought the ball back to the Indians' 40. On a fourth-and-seven, Clark Jackson hit Swain for a 33-yard completion to the 5. Then Drake plowed through, dragging tacklers for the score and a 32-28 lead with 4:39 left to play.

Undaunted, Calaman clipped off a 17-yard run and then Vinluan found Reese Turney for a 37-yard gain. Then, facing a fourth-and-10, Vinluan connected with McLaughlin in stride for a touchdown with only 32 seconds left to play in the game. The two-pointer failed and CV had a 34-32 lead.

Roupp gave Troy more than a glimmer of hope when he returned the kickoff to the Indians' 35-yard line. Jackson then connected with Swain for 10 yards followed by a misdirection play in which Jackson scampered to the 10 to set up Binford's heroics with four seconds showing on the clock.

The Trojans began the game with four straight runs by Ercolino for 45 yards. Jackson capped the drive with a 33-yard weave down the field and Binford added the extra point.

The Indians responded quickly, scoring on their first play of the game when Calaman raced 66 yards for a touchdown.

Troy answered with a drive that featured back-to-back completions by Jackson - one to Hunter Cohick for 12 yards and another to Roupp for 22 yards before Drake scored from a yard out for a 14-6 lead. Drake finished with 136 yards rushing and two touchdowns.

Jackson scored midway through the second quarter on a 3-yard run and finished the night with two touchdowns.

Offensively, Cowanesque was led by Vinluan who scored four touchdowns and converted a two-point play and had over 100 yards passing.

"I'm proud of our kids," said Troy Coach Jim Smith. "It was not a good situation out there heath wise. We had a lot of freshmen on the field. The adversity will help us in the long run if we can get through the next few weeks."