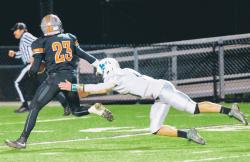 TOWANDA — All season long the Black Knights have battled injuries and had a young roster looking for the moment when everything came together.

On Friday night the Black Knights showed what they are capable of when they play their best as they shut out Wellsboro 17- 0.

Wecker was happy with the way the defense played all night.

Early on it looked like it might be a long night for Towanda as they fumbled the first time they touched the ball. However, the Black Knights defense wouldn’t allow the Green Hornets in the end zone, forcing a three-and-out the first time and then stopping Wellsboro on fourth down the next drive.

"One thing I said was we were trying to give them a couple scores to start the game," Wecker said. "I was really impressed with how our defense played. It's the first time in a long time we took the game to the other team."

"Todd has been solid all year, for Todd obviously this was one of his best games," Wecker said. "I thought Keegan Kisner played a great game. I think overall our D-line was very physical up front. The other thing that really helped us a lot, we had great coverage. Overall defensively we completely took charge and were able to take charge which was nice."

Towanda got on the board with 6:51 left in the half when Brandon

McLinko hit Steven Yates on a 56-yard touchdown pass. Tyler Basse hit the extra point and it was 7-0.

In the third quarter Yates hauled in a 70-yard touchdown pass from McLinko and Basse hit the kick to cap the scoring.

McLinko was 5-for-16 passing for 184 yards with two touchdowns.

Yates had four catches for 167 yards and two scores and Kalob Benjamin had a catch for 17 yards.

"One thing we struggled with all year was injuries, we are constantly plugging holes," Wecker said. "We still have some injuries, but overall most of the kids are healthy. The maturity thing, they are starting to understand responsibilities. We really looked comfortable on both sides of the ball."

Wecker was happy to see the play of the seniors on Friday and he thought the younger kids fed off that.

"Our seniors were leaders tonight, they really took charge and they played well tonight," Wecker said. "The seniors really did what they were supposed to do, the young kids they looked up to the older kids. Started making things happen on their own, if they can continue to do this I think the future looks really bright for the next couple years."

Kisner had 111 yards rushing for Towanda on 23 carries and McLinko and Griffin Sites each ran for 7 yards.

Quinn Henry was 6-for-22 for 42 yards passing for Wellsboro and Brandon Lamphier was 2-for-4 for 19 yards.

Henry ran 17 times for 59 yards and Chase Moser had 33 yards on 11 carries, while Nick Tremper gained 15 yards on nine carries.

Parker Jones had four catches for 36 yards, Moser had a 12-yard catch, Henry had a 7-yard catch and Johnny Rowland had one catch for 6 yards.

While the season hasn't been everything the 2-7 Black Knights had wanted, Wecker was happy that the last home game for the seniors was a special one.

"It was one of the more dominating performances I have seen the last couple of years," Wecker said. "It was one of the more dominant performances I have seen our kids play the last couple of years. It was great to see it tonight. It's great for the seniors, it's a great moment and something they will always have and no one can take away from them."