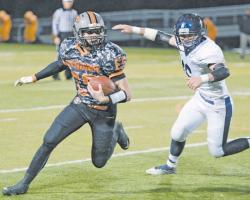 TOWANDA — The home team's efforts wouldn’t be enough last night, as the visiting Central Columbia Bluejays would walk away with a late fourth quarter 16-14 victory over the Towanda Black Knights. The loss would leave Towanda with a 1-6 record on the season so far, and give Central Columbia their first win.

It wouldn't be until the first quarter was almost over that the visiting team would score. Central Columbia would jump on their own punt on fourth-and-six, giving them the ball at the Towanda 13-yard line. From here, two short carries on part of Evan Campbell would set the Bluejays up at the Towanda eight, where Aaron Farver would complete a touchdown pass to teammate Brady Crawford in the right corner of the end zone with 2:13 left in the first quarter.

Garrett Barilar would add the extra point and Central Columbia would take the lead, 7-0.

Fumbles, interceptions and penalties would consume the remainder of the first quarter (and take up most of the second) before the Black Knights would put their own points up on the board. After two consecutive flags, one on the offense and one on the defense, Towanda would hold onto the ball, setting up on the Central Columbia 13-yard line. From here, Keegan Kisner would easily run up the right side and into the end zone for the score. Tyler Basse's extra point was true, and the game was tied, 7-7 with 2:03 left in the first half.

It wouldn't take long for the visiting Bluejays to pull ahead again, their next possession being the key to another touchdown. Three completed Farver passes would set the visiting team up on the Towanda 9-yard line. From here, quarterback Aaron Farver would have no trouble finding Brady Crawford in the left corner of the end zone and connecting with him for the short touchdown pass. This time, Barilar’s extra point wouldn't make the cut, but the Bluejays still led, 13-7 to end the first half.

Both teams would trade punts to start the second half after emerging from the locker room and the third quarter would go by with no scoring. It would be Towanda, though, who would add some more points to the board next. With 8:31 left in the fourth quarter, Dalton Potter would find a wide open Steven Yates for the 25-yard touchdown pass. Basse would again add the extra point, and the Black Knights would take their very first lead of the night, 14-13.

An impressive 12-play drive on the Bluejays' next possession would set them up at the Towanda 9-yard line, where on fourth-and-seven, kicker Garrett Barilar would complete a 19-yard field goal to set the final score, 16-14 with 2:02 left to play in the game.

Next week, Towanda travels to Alparon Park to take on the 5-2 Trojans, and Central Columbia will play Danville at home.