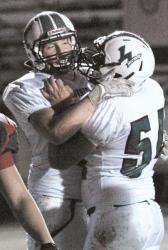 TROY — With Troy looking to fight back and tie the game, the Wellsboro defense came up big late Friday during their 14-12 win over the Trojans.

Down 14-0 the Trojans scored back-to-back touchdowns, but the Green Hornets defense got the stop on the two-point try with 5:17 left and Wellsboro held on to spoil Troy's homecoming.

A scoreless game throughout the first quarter, Wellsboro got on the board at 7:03 of the second quarter when Quinn Henry hit Parker Jones for a five-yard touchdown. Nic Ingerick made the extra point and it was 7-0 at the half.

Henry and Jones connected again in the second quarter when the two hooked up for a 45-yard touchdown with 5:30 left in the third quarter to make it 14- 0.

Troy got back-to-back touchdowns from Ben Sherman in the fourth quarter to try and rally back.

Sherman caught a 29-yard screen pass from Clark Jackson with 9:25 left in the fourth quarter. The extra point failed and it was 14-6.

Sherman got the Trojans closer with 5:17 left when he scooped up a fumble and ran 45 yards for the score, but the two-point pass failed.

Wellsboro stopped Troy's final drive forcing an incomplete pass on fourth down to hold on.

Henry was 4-for-10 for 73 yards and two touchdowns, with an interception, for Wellsboro and he ran for 26 yards on 13 carries.

Nick Tremper had 72 yards on 18 carries for the Green Hornets and Chase Moser ran 10 times for 38 yards.

Jones had all four catches for 73 yards and two scores.

Moser had an interception on defense and had seven tackles and Jones had 10 tackles and forced a fumble, while Johnny Rowland recovered a fumble.

Robert Brown had 12 tackles and Tremper had nine tackles.

Sherman ran for 150 yards on 26 carries and he had a 29-yard catch for the touchdown. He also completed one pass for five yards.

Jackson completed two passes for 35 yards with a touchdown and an interception.