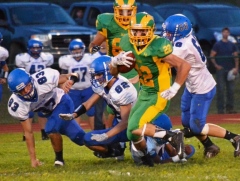 WYALUSING - The Wyalusing Rams clinched a 21-6 victory over the visiting Warrior Run Defenders last night at Peterson Stadium on the back of three Luke Jennings touchdowns and a two-point conversion.

Warrior Run got the ball rolling early in the game, though. With the clock reading 10:07, on second and goal, Warrior Run's Tyler Brown would scramble two yards into the end zone for the score. Austin Soltesz's PAT was no good, but the Defenders still took the lead, 6-0.

Although the visiting team put the first touchdown on the board early, the Ram defense made sure six points was all they got.

The teams would trade possessions before Wyalusing had a chance to score. With the ball on their own 24, Luke Jennings and Derek Frederick would take turns running, setting the Rams up at their own 41. From here, Jennings would run right, then cut across the field to the left side and into the end zone for the 59-yard touchdown. Ryan Kipp's extra point was good, and Wyalusing led, 7-6.

A couple of traded punts would end the first quarter, and the Rams would not score again until there was just over three minutes remaining in the first half. A key block from Derrick Clark would allow passage for a Jennings 25-yard touchdown run up the left side of the field. This time, Kipp's extra point would be blocked, the scoreboard now reading 13-6 in favor of Wyalusing. Fumbles and penalties and punts would consummate the remainder of the first half of the football game, as well as the entire third quarter. The Defenders' Michael Muffly would punt the ball, giving it to the home team on the Warrior Run 34. Luke Jennings would complete a quick and easy 5-yard scramble to bring them to the 29. A false start on the part of Wyalusing at the tail end of the third quarter would take back a Jennings 30-yard touchdown, and the Rams would be moved back five yards to the 34, where they started.

Two carries later and the Rams would set up shop on the Warrior Run 5-yard line. From here, Jennings would run in his third and final touchdown on the night with 12 seconds gone from the 4th quarter. Wyalusing would attempt the two-point conversion to extend their lead even further, with a hand-off to Luke Jennings, who would easily cover the three yards needed for the points. With almost an entire quarter left to play, the final score was set at 21-6.

Warrior Run would attempt some passes on consecutive fourth downs, but only to be stopped short by the Ram defense. Likewise, Wyalusing would either fumble or turn the ball over on downs to finish out the game.

Next week, Wyalusing hosts the Troy Trojans at home and Warrior Run will play Central Columbia.