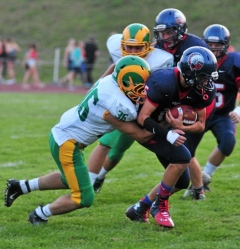 SAYRE - The Wyalusing Rams scored 30 first-half points on their way to a 44-14 season-opening win over the Redskins on Friday night.

Luke Jennings ran for 167 yards and three touchdowns on just 12 carries to lead the Wyalusing attack.

Derek Frederick started the offense for the Rams, returning a punt 79 yards for a score with 8:20 left in the opening quarter. Jennings ran in the two-point try to make it 8-0.

Derrick Clark scored on a five-yard run with 1:50 left in the first quarter and Jennings again ran for two to make it 16-0.

In the second quarter Jennings ran in from 22-yards out with 8:23 left in the half and Clark had the two-point run to make it 24-0.

Sayre got on the board with 2:41 left in the half when Tyler Belles scored on a one-yard run. The two-point run failed and it was 24-6.

Along with the 167 yards for Jennings, the Rams got 65 yards from Clark on nine carries. Collin Edsell ran two times for 24 yards and Brandon Dake had six carries for 20 yards.

Calin Burke ran four times for 13 yards and Ryan Kipp had a carry for nine yards, while Frederick ran for five yards and Luke Minturn had three yards rushing.

Frederick was 2-for-2 passing for 55 yards. Edsell hauled in a pass for 42 yards and Jennings had a 13-yard catch.

Lundy-McCutcheon was 7-for-8 passing for 42 yards and a score and Belles caught four balls for 12 yards. John Esposito had a catch for 15 yards, Patrick Cooley had a catch for nine yards and Marshall Felt caught one pass for six yards.

Garrett Weaver had 16 carries for 51 yards and Belles gained 36 yards on seven carries.