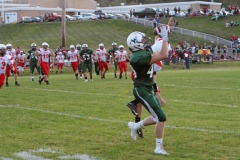 WELLSBORO - The Green Hornets scored 30 first-quarter points on their way to a 65-7 win over Bucktail on Friday night.

Quinn Henry had four touchdowns, all in the first quarter, to lead the Green Hornets.

Henry threw a 9-yard touchdown to Parker Jones at 11:31 of the first quarter and Anthony Cooper ran in the two-point try.

Henry had a 2-yard run and a two-point pass to Jones at 8:34 and Henry completed a 25-yard touchdown to Chase Moser at 2:59 with Nic Ingerick making the extra point.

With eight seconds left in the quarter Henry scored on a 23-yard run and Ingerick hit the kick.

Cooper had a 3-yard run at 5:22 of the second quarter and Henry hit James Mundy on the two-point try.

Alex Kozuhowski had a 70-yard fumble return for a score at 5:54 of the third quarter and Tyler Kennedy hit the extra point and Moser had a 22-yard run at 4:48 with Kennedy hitting the kick to make it 51-0.

Bucktail scored on a 1-yard run with five seconds left in the game.

Moser had three catches for 104 yards and a score, Jones had four grabs for 68 yards and Cooper had one catch.

Tremper, Moser and Cooper all had interceptions and Kuzuhowski had the fumble return for a score.