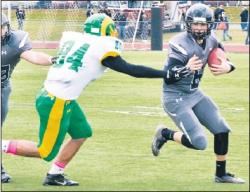 ATHENS — Sometimes, even good teams, need to win games when they don't play their best.

That's exactly what the Athens Wildcats did on Saturday afternoon as they rallied for a 28-20 win over the Wyalusing Rams.

"One of the characteristics of a pretty good team is you have to win ugly, and this was an ugly ballgame," Athens coach Jack Young said. "It really was on both sides of the ball. I am sure Wyalusing is going to kick themselves with all the fumbles and we didn't do a great job. I don’t know if we have put the ball on the ground more than twice all season and today we did. It was just tremendous character, tremendous grit, it was real nice."

The game included 12 fumbles, seven lost, between the two teams, with the Rams losing the ball five times in the game. There were also over 20 penalties in the game, including one that wiped away a Wyalusing 49-yard touchdown run by Luke Jennings.

It wasn't exactly the show the Wildcats planned for their Homecoming crowd, but they know any win is nice.

"We were a little out of sorts today and I'm sure Wyalusing feels the same way. It's a Saturday afternoon thing, our belief is no matter when or where we play we are going to show up to play and we did that today. The bottom line is our goal was 1-0 this week and we did that."

The Rams struck first on Saturday marching downthe field on their opening drive, and capping it off with a 38-yard run by Jennings. The extra point failed and just 3:51 into the game it was 6-0 Wyalusing.

The Rams had a chance to add to the lead as they marched back deep into Wildcats' territory.

However, a fumble at the one-yard line gave the ball back to Athens.

After the Rams defense forced a three-andout, a short punt gave the Rams the ball back at the Athens 28.

Wyalusing moved the ball back into the red zone, but another fumble returned the ball to Athens.

Athens quarterback Aaron Barry was happy the defense was able to come up with the fumble recoveries to give the ball back to the offense.

"They really saved us a couple times," Barry said. "Hats off to them, they did a great job."

Both teams had chances, but turnovers and penalties slowed their efforts in the first half.

Athens finally got on the board with 1:24 left in the half when Barry hit Kalen Keathley on a 10-yard touchdown pass. Austin Lister hit the extra point and the Wildcats led 7-6 at the break.

In the second half Zack Jayne gave the Wildcats the lead as he ran in from three yards out and Lister hit the kick with 7:09 left in the third as the Wildcats went ahead 14-6.

The Rams again started to get their offense going in the third as they scored two touchdowns in just over two minutes.

The Rams got the ball back and went right back to work and Jennings ran in from 13 yards out. Collin Edsell converted the two-point try and it was 20-14 Wyalusing.

"Wyalusing came out in the second half, put a couple scores on the board and I was worried about our guys," Young said. "But, again they showed a lot of character and some tremendous grit out there."

The Wildcats regained the lead in the fourth quarter as Barry dove in from a yard out and Lister hit the extra point to put Athens up 21-20 with 7:12 left in the quarter.

"I was just happy we were in the end zone," Barry said of his touchdown.

Twice the Wildcats converted fourth and one tries with Barry in the game and he also had the touchdown run on a quarterback keeper, as he converted every third and fourth and one opportunity he got running the ball.

"They start submarining us, tightening those 'A' gaps off the center, but we weren't going to go away from what we do," Young said. "We need a half a yard, we are going quarterback sneak."

The Wildcats added to their lead with 3:06 left in the game as Luke Newman ran in from a yard out and Lister hit the kick to cap the scoring.

"We started later in the game to take advantage of some things they were doing up front," Young said. "We got a couple traps in and that last touchdown, we just thought we'd go a little more outside and give it to Luke, he deserves a little of that to."

Starting running back Peyton Lewis missed the second half with an injury and with him sidelined Jayne stepped up, running for 148 yards on the day on 23 carries.

"We kind of have been a two-headed monster there, and Zack is a very tough kid and so is Peyton," Young said. "I think Peyton is okay, we will just play it by ear and get him back on the field as quick as we can, but Zack did a tremendous job.

"His vision is getting better and better every week and he's a tremendous young man. Our offensive line, we talked both sides of the ball, the line had to step up, and offensively especially they really stepped up. Aaron didn't have his sharpest day throwing the ball, but we still completed a couple passes that were big for us. I couldn't be prouder of these guys."

Barry was happy with the way his line was playing and how Jayne ran the ball.

"He carried the ball great, with a great help from the 'O-line' they did a lot of work," Barry said.

While the wind made throwing the ball hard, Barry knows the line and the running game really stepped up.

"Wind is never fun, but we got the job done," he said. "Our running backs and O-line did great."

Along with the 148 yards from Jayne the Wildcats got 32 yards rushing from Lewis, while Newman ran for 21 and Keathley had 15.

Barry was 7-for-20 for 85 yards and a touchdown throwing the ball and Keathley had five grabs for 51 yards, while Austin Lister had two catches for 34 yards.

Jennings ran for 163 yards and two scores on 22 carries for the Rams and Derrick Clark had 41 yards on eight carries, while Edsell ran for 27 yards on four carries and Kipp had 22 yards on five carries.

Calvin Burke was 3-for-7 for 37 yards passing and Jon Morrison had a 26 yard catch, while Jennings had two grabs for 11 yards.

For Athens the win keeps them atop the NTL standings, and the players were happy to get the win on Homecoming.

"It was a great win, I'm glad to go out as a senior and win our last homecoming," Barry said. "When you are in the game you don't think about it too much, but it's a great feeling to win when you come from behind."

Wyalusing is at Wellsboro on Friday and Athens hosts CV.