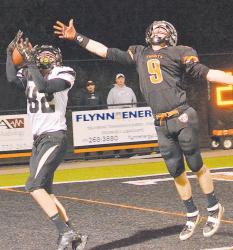 TOWANDA — It was a heartbreaking homecoming loss for the Towanda Black Knights last night under the lights, as the visiting Athens Wildcats would step off the field with a 56-13 victory.

The Black Knight defense allowed Athens to have their way, giving up 147 total offensive yards to the visiting team in just the first quarter.

Athens' Peyton Lewis and Zack Jayne would take turns carrying the ball, setting the Wildcats up at the Towanda 12, where on first-and-10 Jayne would run up the left side for the first touchdown of the night. Austin Lister's extra point was good, and the visiting team went up, 7-0 with 7:39 left in the first quarter.

The Athens defense, on the other hand, would only allow Towanda to gain two yards on their ensuing possession before forcing a three-and-out, giving the Wildcats the ball on the Towanda 40-yard line.

The visiting team would make their first mistake of the night on fourth-and-six, when an attempted Aaron Barry pass would be intercepted by Towanda, giving the Knights another chance.

Both teams would end their next possession on fourth downs before more points would be added to the board. This time when the Wildcats scored, it would be on a 41-yard punt return from Kalen Keathley with 10:50 left to play in the first half. Lister would again add the extra, and the Wildcats would extend their lead, 14-0.

Towanda's next offensive drive would consist of two incomplete passes and a short run, setting them up at their own 23 on fourth-and-seven, where a Tyler Basse punt would be blocked by Athens. Jarod Stanfield would scoop up the ball and race the short 10 yards needed into the end zone for the Wildcats' third touchdown of the night with 9:53 left in the second quarter. Lister would add the extra point, the scoreboard now reading 21-0 in favor of the visiting team.

The Black Knights' bad luck on offense would continue through their next possession. After being backed up five yards on part of a false start penalty, quarterback Dalton Potter would fumble the football, allowing Athens' Matt Elliot to recover and carry the ball all the way to the Towanda three-yard line.

From here, Peyton Lewis would take the initiative with the clock reading 9:21 and easily run up the middle three yards to cross over into the end zone. Lister's extra point was true, and Athens led, 28-0.

Towanda would again fumble after receiving the kick following Athens’ touchdown, giving the visiting team the ball at their own 38. It would take a little bit more this time around for the Wildcats to score, with Lister, Lewis and Barry taking turns carrying the ball. Finally, on first-and-10 on the Towanda 25, Aaron Barry would complete a touchdown pass to Austin Lister in the left corner of the end zone. Lister would add the extra point, the scoreboard reading 35-0 with 3:23 left in the half.

Each team would get a chance to score before heading into the locker rooms, Athens being the first. On third-and-three on the Athens 49, Towanda's Brandon McLinko would throw an interception into the hands of Kalen Keathley, who would race 57 yards into the end zone for the touchdown with 32 ticks of the clock left in the first half of action. Lister's extra point was true, and Athens again extended their lead, 42-0.

With Athens setting up to kick off, nobody expected the Black Knights to return the ball the way they did. Towanda's Steven Yates would receive the kick-off at the one-yard line and race, coast-to-coast, up the middle of the field 99 yards for the home team's first touchdown of the night with 18 seconds left on the clock. Brandon McLinko would attempt the two-point conversion, but his pass would fall incomplete, and the teams would head into the locker room, the scoreboard reading 42-6.

Coming out from the halftime break, both teams would have short, four-play possessions, and it would be Towanda who would be the first to score in the third quarter. An impressive 10-play drive would set the Knights up at the Athens one-yard line, where Steven Yates would get his second touchdown of the night with a short run into the end zone with 2:03 left to play in the third. Tyler Basse would add the extra point, and Athens' lead would be cut, 42-13.

Athens would answer by switching up their offensive line, junior Justin Reagan in as quarterback on their next possession. To begin the fourth and final quarter of the game, on third-and-seven, Reagan would complete a 10-yard touchdown pass to Jarod Stanfield with 11:16 left to play in the game. Lister added the extra point, and Athens extended their lead yet again, 49-13.

Towanda would attempt to add some more points to the board on their next possession, but would slip up and fumble the ball, allowing Athens to recover. Sophomore Nate Bradley would get his 15 minutes of fame, gaining 58 yards on the Wildcats' offensive drive and racing up the left sideline for the final touchdown of the night. Lister’s extra point attempt was good, and the final score was set, 56-13.