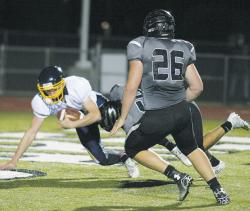 ATHENS — The Athens Wildcats would light the scoreboard up on a brisk fall night against Cowanesque Valley as they earned a 64-10 NTL win.

Athens would start the scoring on the opening kick off with a nice 65-yard return touchdown by Kalen Keathley putting the score at 7-0.

After a fumble by Cowanesque Valley on their third play of the game, Athens would take advantage of the mistake and turn it into a two-play touchdown run by Peyton Lewis putting Athens up 14-0.

After a three-and-out by CV, Wildcat quarterback Aaron Barry would find Austin Lister for a 26-yard passing touchdown putting Athens up 21-0.

At this point Athens was never going to look back.

After another three-and-out by Cowanesque Valley, Athens' Barry would connect again with Lister for a 33-yard touchdown play putting Athens up 28-0 with 5:48 remaining in the first quarter. Athens would bring in Justin Reagan to quarterback and he continued the scoring with a 1-yard touchdown pass to Keathley for a touchdown, ending the first quarter with the score Athens 35-0. In the second quarter Athens' Zack Sheppeck had a nice run of 43 yards for a touchdown putting Athens up 42-0 at the 10:08 mark.

Cowanesque Valley would score on their next two possessions with a Connor Calaman 1-yard touchdown run and a Joey Brown 22-yard field goal ending the first half at 42-10.

Athens would cap the night on Nick Watkins' rushing touchdown of 8 yards ending the game 64-10.

All in all Athens saw 12 different players run the ball on the evening.

Barry finished 3-for-3 for 69 yards and two touchdowns while Reagan was 3-for-5 for 16 with the one score.

Lister had three catches for 69 yards.

Calaman led CV with 79 yards on eight carries while Colton Vinluan was 5-for-10 passing for 48 yards with a pick.

Athens will play Troy next week while CV faces Canton.