Athens rolls past Sayre to go 9-1. 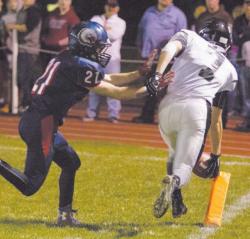 SAYRE — Athens' quarterback Aaron Barry overcame two early interceptions to put up 170 yards and two scores and the Wildcats' defense gobbled up a plethora of Sayre running backs, all in a convincing 52-9 win over the Redskins Friday night, a win that finishes the regular season and sees the Rusty Rail stay in Athens.

The win for Athens is a week removed from claiming an NTL championship over Troy, and as emotional as that game was for his Wildcats, head coach Jack Young said there was no room for a hangover heading into the rivalry game.

"We slowed down a little bit at practice this week," Young said. "But when they got off the bus this week we were ready to go."

"The Rusty Rail, we're always excited to play it," senior linebacker Gabe Sporn said. Sporn helped hold the Redskins to one touchdown in the game. "It's a game we'll remember for the rest of our lives."

Athens was first on the board with Zack Jayne scoring from 7 yards out midway through the first quarter after an efficient eight-play, 52-yard drive. Austin Lister's kick was blocked, giving the 'Cats the early 6-0 advantage.

Meanwhile Sayre's running attack struggled, and on the third play from scrimmage for Sayre the Wildcats swarmed the quarterback, forcing a turnover. Lister would take advantage after a Sayre stop, booting a 35-yard field goal — his second 35 yarder in as many weeks — to give Athens the 9-0 lead with six minutes to play in the first quarter.

Sayre would respond, using 15 plays to get into kicker Mitchel Ward's wheelhouse. Ward's 26-yard field goal again made it a one-possession game at 9-3 in the second quarter.

Barry and the 'Cats would respond quickly, with Lister hauling in a pass on a corner route and taking it to the house for the 67-yard score, giving Athens a 16-3 advantage after the kick.

The 'Cats defense plugged the holes up front and locked down the stable of Sayre backs, but on successive drives Barry threw interceptions. One caught by Jacob Goodrich and one caught off of a tipped pass by John Esposito.

"It's going to happen," Barry said. "There's nothing you can do about it. You've just got to move on."

While the Athens defense continued to lock down Sayre, Wildcats cornerback Kalen Keathley picked off a Gavin Lundy-McCutcheon pass and returned it 33 yards for the score. A two-point conversion saw Athens up 24-3 with the first half winding down.

After another Sayre three and out, Barry would move on and move the ball with a short memory and a long ball, this one to Keathley on a wheel route that scored from 54 yards out. The kick gave Athens the commanding 31-3 lead.

"He made a couple of mistakes but he's a player, he's not going to let that affect him," Young said of his quarterback. "We didn't change the game plan at all."

Sayre would be the first team to score in the second half with Tylor Belles scoring on fourth-and-goal from the three. The point after was block, locking in Sayre's points total at nine.

Meanwhile Athens ripped three more touchdowns all on the ground, with Peyton Lewis, Jayne and Justin Reagan all crossing the goal line. Jayne's second score of the night came on a 62-yard reverse and Lewis' was a 74-yard dash.

"All in all it was a real good night," Young said. "A little sloppy at times, but when you play a game like this you just want to stay physical and get after it. That's what they did, they were champions tonight."

Tylor Belles led the Redskins with 19 carries for 116 yards and a touchdown.

Athens finishes the regular season at 9-1 and will prepare for district playoffs. Sayre finishes at 4-6.