Athens pulls away to beat Tunkhannock. 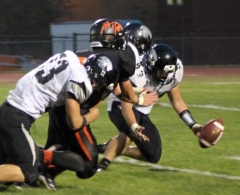 The Wildcats succeeded at both on Friday night, and used a punishing rushing attack that resulted in four touchdowns en route to a 43-12 win over Tunkhannock at Tunkhannock Memorial Stadium.

"Those things are what did it for us tonight," Young said. "We stuck to our game plan all night long and we played a lot of people, which paid off. We didn't do a lot of things well in the first half, but we progressed. We were really patient tonight, and good things happened."

After Athens punted on its opening drive, the first half started in Tunkhannock's favor, as first-year quarterback Logan Cywinski scampered for 48 yards on the drive, including a 2-yard run to put the Tigers up 6-0.

Tunkhannock continued to hold momentum into the second quarter, but a running into the kicker penalty gave the Wildcats new life on their third drive, and they took advantage.

Athens got the ball back on the Tunkhannock 45-yard line, then worked down the field until Zack Jayne ran it in from five yards out for a 7-6 lead that would hold into halftime.

In the third, three-straight 5-yard penalties stalled the Tigers' opening drive and Athens wasted little time getting back on the board.

Starting at the Tunkhannock 24, the Wildcats worked around a chop block penalty and used an 11-yard pass from Aaron Barry to Kalen Keathley to set up Jayne's second touchdown of the night, again from five yards.

He would add another on the next Athens drive, this time from 15 yards out, to put the Wildcats up 20-6 with 2:19 left in the third.

Jayne finished with 130 rushing yards, while Barry threw for 63 yards.

Tunkhannock wasn't done yet however, as Cywinski ran for 17 yards on the next drive before breaking free for a 63-yard touchdown that brought the Tigers to within 20-12.

The sophomore ended up with 142 rushing yards on the night and also threw for 52.

However, Athens seized the momentum for good in the fourth quarter, this time with special teams.

The Tigers punted with 10:50 left in the fourth and Keathley was back to receive.

The junior was patient, letting the ball bounce a few times before scooping it up and running 65 yards for the touchdown.

Special teams came in to play on Athens' next drive, as Austin Lister pinned the Tigers back to their own 3-yard line, resulting in an eventual safety by the Wildcats defense.

"We preach special teams and hammer it in daily," Young said. "Austin did a great job on his kickoffs tonight and he's only getting better. Our ball placement was solid all game."

After receiving the ball from the safety, the Wildcats put the game away as Barry rewarded Lister for his kicking efforts with a 11-yard touchdown pass to make the score 36-12 with 5:47 left.

Because of Lister's foot and some players missing drives with injury, Tunkhannock struggled to find its rhythm offensively and an answer to the Athens running attack.

"We started out strong and our confidence was there, but we had to do some reshuffling and that made a huge difference," Tunkhannock head coach Jan Cechak said. "We're going to take some licks, but we just need to keep positive and keep staying after it."