Athens pulls away from North Penn-Mansfield. 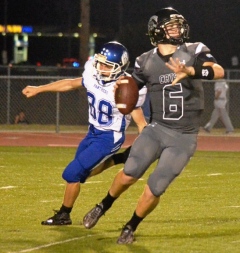 Keathley scored on an interception return, a long TD run and a punt return.

"He's a play-maker and tonight was a great night for him," said Athens coach Jack Young. "He's going to have a lot of nights like this, there's no doubt in my mind.

After an exchange of punts to open the game, North Penn's Brock Burleigh went to the air, but his pass deflected off a receiver to Keathley, who raced 60 yards down the far sidelines for a score. Austin Lister's PAT kick made it 7-0 with 6:16 left in the first quarter.

The Panthers needed just 66 seconds to answer. Just three plays after the ensuing kickoff Burleigh connected with Joel Whitteker on a 77-yard TD pass to slice the deficit to 7-6.

The Wildcats answered quickly as well, taking the ensuing kickoff and marching 69 yards on six plays. Peyton Lewis opened the scoring drive with a 34-yard run and Zach Jayne capped it with a 13-yard TD run with 2:19 left in the first quarter to up the lead to 13-6.

Midway through the second quarter, North Penn had driven deep into Wildcat territory, but Jayne came up with an interception in the end zone to end the threat.

After Athens was forced to punt the ball away, Burleigh connected with Mason Gee on a 47-yard TD strike to cut the deficit to 13-12 with 2:33 left in the first half.

The Wildcats took the ensuing kickoff and staged a quick four-play, 70-yard drive - capped by a 47-yard sweep by Keathley around the left end for a TD with 59 seconds left in the first half. Aaron Barry's toss to Bill Bennett for the two-point conversion gave Athens a 21-12 lead.

"We didn't come in planning on running that jet sweep, but with what North Penn presented us, I thought we had to give it a shot and it was real effective," said Young.

The Wildcats took total control of the game with an 89-yard, 15-play scoring drive to open the second half.

The big play in the drive was a 31-yarder by Lewis on a fake punt to convert a fourth-and-9 at midfield. It was capped by a 1-yard run by Jayne with 5:16 left in the third quarter.

Burleigh's third TD pass of the game, a 31-yarder to Brendan Hill, then a toss to Garrett Bickhart on the conversion sliced the deficit to 35-20 with 3:30 left in the game.

Lister capped the scoring with a 35-yard field goal with 29 seconds left in the game.

Lewis led Athens on the ground with 152 yards on 22 carries while Keathley had 74 yards and a TD on three carries and Jayne added 61 yards and two TDs on 11 carries.

Barry completed 3 of 13 passes for 64 yards and was intercepted once. Keathley had two catches for 15 yards and Lister had one grab for 49 yards.

Burleigh completed 21 of 32 passes for 275 yards and three TDs, while being picked off three times. Bickhart led the Panthers with seven grabs for 50 yards, while Brendan Hill had four catches for 48 yards and a TD, and Whitteker had three catches for 96 yards and a TD.