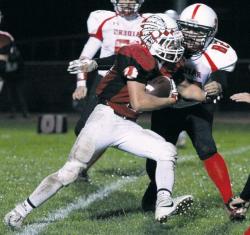 CANTON — In a game that featured what seemed to be more penalized plays than plays without, the hosting Canton Warriors defeated the Red Raiders of Montgomery with a final score of 36-14.

The Warriors used a balanced offensive attack to control the defense of Montgomery all evening long.

Quarterback Ridge Moore for the Warriors went 11-for-26 throwing the football for 127 yards and two passing touchdowns. Bryce Cole and Gabe Barnett were on the receiving ends of Moore's touchdown passes.

Gavin Hoffman led the rushing attack for the Warriors carrying the football 15 times for 46 yards as well as recording two rushing touchdowns.

Hunter Budman led the run heavy offense of the Red Raiders recording 15 carries for 136 yards and had two rushing touchdowns, scoring the only points for Montgomery on the evening.

Strouse went 4-for-8 throwing the football for 47 yards but was intercepted twice.

The Red Raiders received the opening kickoff but would be forced to turn the ball over on downs when the Warrior defense held them on a fourth-and-six.

Montgomery then held the Warrior offense to a quick three-and-out on their opening possession of the game.

However, the Red Raider returner muffed the punt as Brady Bryington of Canton would fall on the loose ball giving Canton a new-set of downs from their own 26-yard line.

Canton would capitalize on the great field position after Moore connected with Hoffman on a 23-yard pass that would set up Hoffman's eventual three-yard touchdown run. After the failed two-point conversion, Canton had jumped out to a 6-0 lead.

Washington would then intercept Strouse on Montgomery's next drive but the Canton offense would fail to respond to the turnover and would be forced to a three-and out.

Canton lined up to punt the ball away on a fourth-and-one deep into their own territory, but the punt would be blocked by the Red Raiders.

Just as the night had gone for the visitors, on their very first play after the blocked punt, Budman would cough the ball up as Canton recovered to end the first quarter of play.

Montgomery would put together a lengthy drive after forcing the Warriors to punt with their first possession of the second quarter. The Warrior defense would hold strong on a fourth-and-six to receive the ball after a turnover on downs by the Red Raiders.

On Montgomery's next drive, Strouse would be intercepted again by Washington.

Canton began work at their own 23-yard line. Again, they would drive the field on a lengthy drive. This time, Moore tossed to running back Jimmy Bowman who took a step back and fired a pass into the back of the end zone into the hands of Washington who scored the touchdown off the running back option. Moore would connect with Cole again to convert the two-point conversion with just 15 seconds left in the half as the Warriors took the lead 22-0 heading into halftime.

Canton would receive the opening kickoff of the second half and would begin at their own 20-yard line. The Warriors would put together a drive lasting over half of the quarter that was capped off by a Hoffman rushing touchdown from two yards out. Hoffman would then rush the ball on the two-point conversion into the end zone as the Warriors would go up 30-0.

Strouse of the Red Raiders would fumble the ball again on their next drive as Canton would yet again fall on the loose ball.

Despite being forced to a three-and-out following the first fumble, Strouse would then fumble the ball for a second time on the game as Canton would recover the fumble.

It then took Moore and Cole one play to connect on a 50-yard touchdown pass and after the failed two-point conversion, the Warriors led 36-0 entering the final quarter of play.

Montgomery would get two touchdowns in the final quarter. Both touchdowns came from Budman. The first was from 11 yards out as the second was from 23. Both times the point after attempt was converted. The final score reads 36-14 in favor of Canton.

The Warriors advance to 3-4 on the season and are back in action next Friday as they visit the North Penn-Mansfield Panthers.

Montgomery remains winless on the season as they fall to 0-7. They travel to Sayre next week to take on the Redskins.