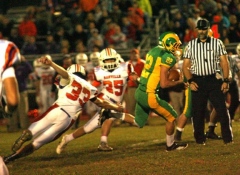 WYALUSING - The Wyalusing Rams topped off homecoming night perfectly with a much-earned 31-0 victory over the visiting Danville Ironmen last night at Peterson Stadium.

"I'm proud of the way our boys played," commented Wyalusing head coach Jim Buchman. "My hat goes off to Danville as a program, but I thought we played really well tonight, especially defensively. I think that is a strength of this team - our defense. I'm just really proud of the way the kids played; they played fast, they played physical and they played tough."

Despite the traded punts (and the interception thrown on part of Danville) of the first couple drives, the Rams pulled together for the first score on the night. A ten play drive on their third possession would set them up on the Danville 34, and Luke Jennings would run in for the 34-yard touchdown with only six seconds remaining in the first quarter. Warner Mendoza's first PAT of the night was good, and the Rams took the lead, 7-0 at the end of the first.

Danville answered with a punt, and again Wyalusing gained possession of the football. It was no surprise when junior Luke Jennings walked off the field last night with 269 yards on 32 carries and three touchdowns because it would be him who would put up another six points on the board, this time with a 27-yard run up the right side with 4:39 left in the half. Mendoza's extra point was true, and Wyalusing held on to their lead, 14-0.

The Danville passing game proved to be weak, and the relentless Rams' defense had no trouble stopping their running game either. Another punt gave Wyalusing the ball, but this time they would have to settle for a 38-yard field goal on fourth and three, where Mendoza easily sent the ball sailing through the goalpost to end the first half and make the score 17-0.

The teams traded punts on the first two possessions of the second half. But on the third possession (in favor of Danville), an overhead snap to the punter would land in the end zone and the home team would receive two points for the safety upon jumping the ball. With 5:14 left in the third quarter, the Rams extended their lead, 19-0.

This gave the Rams the ball, but again the teams would each take turns punting, until the home team gained possession. Jennings, like running the football is second nature, would glide down the left sideline and into the end zone for the 69-yard score with 8:37 to play in the game. This time, though, Warner Mendoza's extra point didn't make it; but nevertheless, the Danville Ironmen remained scoreless, 25-0.

On an attempted punt on Danville's next drive (where Shane Riley was about to meet with a host of Rams), he would throw a pass to Colton Riley for what would seem to be a touchdown. But a flag was thrown - against the Rams for pass interference and against the Ironmen for a facemask. The two penalties offset each other though, and the touchdown was denied for a replay of fourth down, which resulted in a 55-yard punt from Shane Riley, giving the Rams the ball at their own 20-yard line.

The final score of the game came from Dylan Otis, who made himself known last night under the lights with a few keys runs that put Wyalusing in multiple scoring positions. One first and goal at the one, Otis ran right through the Danville defensive line for the effortless score; and with 27 seconds left in the game, the final score was set, 31-0.