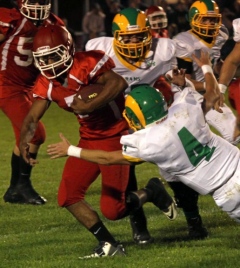 TROY - No one - not the fans, not the players, not the coaches - will forget the Wyalusing Rams that showed up to Alparon Park last night.

Despite the 25-0 final score, the visiting team fought hard. They gave their all, but in the end they came up short.

So maybe Luke Jennings didn't walk away with 200+ yards, and maybe the Rams didn't score, but they made certain that everyone who watched that game would remember. That they would remember their hard work, their physical play. But more importantly, they made sure we would remember that they never backed down.

As for the Trojans, they came out flat in the beginning of the first quarter, but with the help of a few key players they managed to pull away with the victory.

"Wyalusing is a physical football team," said Troy head coach Jim Smith when asked his thoughts on the game. "I think you're going to see that they will win most of the games that they play. I thought they played us really tough. We made some mistakes and we had a boatload of penalties that put us in bad positions essentially, but we just have to grow as a team and get better every week. Hopefully we can do that."

Troy would start off the game by receiving the opening kick-off and setting themselves up at their own 37. The relentless Wyalusing defense forced a three-and-out, and within a matter of minutes, the ball was theirs. Unfortunately, on their second first down of the drive, the Rams would fumble and senior Kyle Jackson would recover for the Trojans.

Five plays later the visiting team would force a punt, giving them the ball. The Trojan defense let up a bit on this play, and Collin Edsell raced 84 yards down the left sideline before a tackle on part of Troy's Nick Stephani and Kyle Jackson. Two penalties later and the first quarter was over, eventless.

The Trojans worked hard to earn those first seven points (two personal fouls on part of the Rams for 15 yards each would aid in this). A 13 play drive, with some running action from Chance Lantz and Ben Sherman, would be exactly what it took, when finally on first and goal at the one, Sherman would put those points up on the board. Stephani's PAT was icing on the cake, and with 9:40 left in the first half, Troy led 7-0.

Both teams traded punts to finish off the half, and went into the locker room with the scoreboard still reading the same. But when they emerged, there was still that fire in the way that the home and visiting teams carried themselves. Nothing was stopping either team from proving something one way or another.

Penalties played a significant role in the game last night, but even that didn't bring down the morale that seemed to infect everyone on the field. On the Trojans' first drive of the second half, they would score again. With only 10 seconds left in the third quarter, and on second and goal, Nick Stephani would easily make his way into the end zone on a one yard run. Only this time, Stephani's extra point was no good, and Troy extended their lead, 13-0.

The senior was on a roll (despite the missed PAT), and this was especially evident when he recovered a fumbled kick return only minutes later.

"Our offensive line did really well tonight," Stephani said about the game. "They got to their blocks and allowed us to put the ball on the ground and put together a couple good drives. We came together when we needed on third down. Brandon Mattocks came through big for us and allowed us to keep the drives alive. Also, I think our defense did really well tonight, but we still have room to improve on both sides of the ball."

That might be so, but there is also plenty of just plain improvement over the last year or so regarding Trojan football, and throughout the rest of the game, this showed. Their first drive of the third quarter would be another one resulting in a score. Another second and goal and Stephani would plow through a mob of Wyalusing defenders into the end zone for the one yard score. The Trojans would try for the two point conversion, but would fall short of it. With 9:24 left in the game, the lead remained in favor of the home team, 19-0.

One more touchdown was in store for the Troy Trojans, and after a fourth and seven punt on part of the Rams, the home team got the ball back at the Wyalusing 26 yard line. Quarterback Isaac Havens would complete a 57 yard pass to teammate Diante Jones, which would play a key role in setting the Trojans up at their own 37. From there, Jones, Mattocks and Havens would take turns running the ball, until Chance Lantz ran the 10 yards for the touchdown on first and 10. The attempt for the extra point was no good, and the final score was set, 25-0 with 2:28 left in the fourth.

Next week, the Rams (2-2) travel to Canton and Troy heads to Waverly with a 4-0 record.