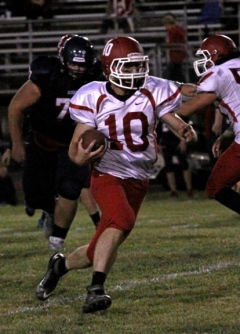 SAYRE - Troy kept things rolling last night with a 60-8 win over the Redskins with two players - Chance Lantz and Diante Jones - scoring two touchdowns each in the victory.

Five of the Trojans' scoring runs came on plays of 25 or more yards.

The Trojans scored on their first possession behind the running of Brandon Mattocks. He took the first handoff and raced 18 yards. Two plays later, Mattocks had a long run called back, but that only gave him a longer touchdown run on the next play. After Mattocks scored from 26-yards out, Nicholas Stephani added the extra-point.

After a three-and-out by Sayre, Troy took over again and looked to score. Quarterback Isaac Havens found Kyle Jackson open for a 25-yard gain and then rushed for eight yards on two carries before adding on a 13-yard run. Chance Lantz followed up with an 11-yard touchdown run.

Sayre's Chris Ray took the kickoff and fumbled after a jarring hit and Dylan Brennan recovered on the Redskins 29-yard line.

Havens found Mattocks for a short gain before Jones found the end zone the first time from 26-yards out. Stephani added his third PAT for a 21-0 lead.

On their next possession, Sayre moved the ball into Troy territory, keyed by a 22-yard run by James Habst. However, on a third-and-one, Benjamin Sherman dropped Habst for a two-yard loss. The Redskins turned the ball over on downs after an incomplete pass from Marshall Felt.

Troy took over and scored on eight plays. The big plays came from Havens, who hit Kyle Jackson for 17 yards and a personal foul against the Redskins. Haven then sliced through Sayre's defense on a 27-yard scamper.

The Trojans pooched the kickoff and Zachery Zimmerman recovered, but on the following play Havens threw deep and Felt pulled down the interception at the four.

Facing a third-and-inches, Michael Ward struggled to pick up the first down only to lose the ball. Kyle Shucker scooped it up and Bradley Hatch tackled him at the one. On the next play, Lantz punched it over for a 34-0 margin.

After another three-and-out by Sayre, Troy mixed things up. Haven found Sherman open for eight and then Mattocks for another eight. Stephani reeled off a 14-yard run before Havens connected with Kyle Jackson for 15 yards. Jones capped the drive with a 27-yard run. Layton Calkins added the PAT for a 41-0 halftime lead.

The Trojans kept the ball moving in the second half when Jones returned the kickoff to the Redskins' 25 yard line after a touchdown-saving tackle by Hatch again. Once again, it was for naught, as Cody Ercolino barreled 25 yards for a touchdown.

On Sayre's next possession, Gavin Lundy-McCutcheon took over at quarterback and threw an interception on his first play.

Kurtis Roupp scored for Troy five plays later on a five-yard run midway through the third quarter - now up 53-0.

The Trojan took over and mounted a 16-play drive. Tristen Drake scored from eight yard line and Calkins caromed the ball off the left upright for the point after.

Larry Hanafan's Redskins did not give up.

Tylor Belles ripped a run of 21 yards and William Hudock followed with runs of 25 and 8 yards. Belles added runs of 6 and 13 yards before Lundy-McCutcheon called his own number on a yard run to avoid a shutout. Matthew Eberlin ran wide for the two-point conversion and final 60-8 tally.

Havens led the Trojans on the ground with 75 yards and a touchdown on nine carries and went 6-for-8 in the air for 89 yards. Jones added 60 yards on just four carries with two touchdowns.

Belles led the Redskins with 59 yards on seven carries.