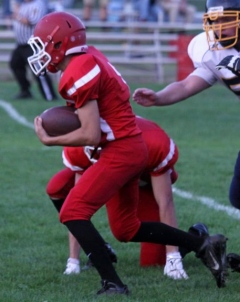 TROY - Last night under the lights at Alparon Park, Troy and Cowanesque fans and players alike learned some simple math: a few underclassmen QBs plus a strong O-line plus multi-talented senior players equals a whopping 61 points.

Throughout the course of the game, freshman Clark Jackson and junior Hunter Cohick took turns running the show. Michael Borden, also a freshman, made an appearance late in the fourth quarter as well.

"I was excited to get out there and get some snaps with varsity," Jackson said of the opportunity. "I have a good line in front of me and we were able to get in a few yards." (It is safe to say that Jackson, Cohick and Borden all have a head start on running the option for the Trojans.)

The visiting Indians would receive the kick-off, ending their drive on a Connor Calaman punt, which was fumbled and recovered by Diante Jones of Troy. The Trojans would set up shop at their own 27, as Jones and Chance Lantz teamed up to tally 34 yards via Cohick's handoffs before senior Brandon Mattocks would rush the 10 remaining yards needed for the score. Nick Stephani's extra point was good, and with 8:17 left in the first, the Trojans led 7-0.

A three-and-out on part of Cowanesque on their next drive gave the home team the ball on their own 45. Stephani picked up 15 yards to start the drive, and Mattocks would finish with a 13-yard TD with 4:34 remaining. Stephani's PAT added another point to the left side of the scoreboard, extending Troy's lead to 14-0.

The Trojans, with their unyielding offensive line, would score twice more at the start of the second quarter. Jackson completed a short three-yarder to Brandon Mattocks on second and ten, setting his team up on the Cowanesque 37. From there, Jones would scamper 21 yards, only to be brought down on the 16 yard line. With no effort, Mattocks would again carry the ball in for the score. This time, the extra point was added by senior Layton Calkins, and Troy led 21-0 with 11:28 to go in the second.

Mattocks didn't bother holding back on the Indians' next drive, when he intercepted a Mike Snyder pass and ran 30 yards down the right sideline for the score. Calkins added the extra point, and the lead increased, 27-0.

The Cowanesque offense fumbled the ball on their very next drive. Jones recovered and the ensuing 32-yard score was as familiar as an old friend. Calkins' PAT was wide left, but nonetheless, six more points were added to the board, and with 8:09 left in the first half, the Trojans acquired a comfortable lead at 33-0.

Along with the appearances of the underclassmen in last night's game, senior Nick Stephani made a name for himself in many different aspects of the game. He is proving himself early in the season as a kicker as well as someone who can carry the ball every now and then. The Indians would take the chance and go for it on fourth and twenty-three, and Stephani would step in and intercept a pass from Joey Brown, taking it 31 yards in the opposite direction.

With the ball in Trojan territory, Cohick made being in charge of the option offense look easy. Cody Ercolino, Chance Lantz and Diante Jones would all take turns receiving his handoffs, when finally, on third and eight, Cohick would throw a touchdown pass to teammate Rob Rigby with only a minute and two seconds left in the second half. Layton Calkins added the extra point, and Troy left the field for halftime with 40 points on the board.

With a running clock, the second half flew by, leaving the Trojans a short 24 minutes to prove themselves more than they already had. The home team received the second half kick-off, and it was time for Clark Jackson to get back in there. On this Trojan drive, Jackson had two carries for 24 yards. But Ercolino was the highlight of this drive, as he ran the short two yards that it took to put another six points on the board. With 8:49 left in the third quarter, Stephani added the extra point and Troy now led 47-0.

Another three-and out from the Indians gave Troy and Hunter Cohick the ball on their own 37. This time though, the Indians would put a stop to the mighty Trojans and take over on downs as a result of Cohick being tackled in the backfield for a loss of 9 yards.

Cowanesque did not stop there; they were determined to put up some points. On first and ten, senior Ethan Mead ran an all-too-easy 57 yards into the end zone for the score. Mead's extra point attempt was no good, and the Indians were on the board for the first time on the night, 47-6.

With one quarter remaining in the game, senior Jared Mattocks made an appearance and scored on second and eight for the Trojans with a 29 yard spurt down the right side. Stephani again added the extra point, and the Trojans continued to lead, 54-6.

The Indians made an impressive run in their next 10 plays, only to throw an incomplete pass on fourth and thirteen, and Michael Borden stepped in as QB for the Trojans with the ball set at the Cowanesque 43.

On first and twenty, freshman Cale Bradley ran a lengthy 43 yards for a 61-6 lead on the visiting team. And with Stephani's extra point, the final score was set.

Next week, the Trojans travel to Sayre in hopes of continuing their winning streak, and Cowanesque travels to Muncy.