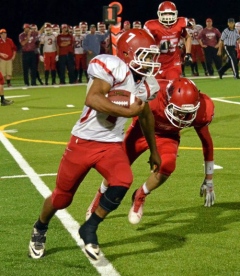 WAVERLY, N.Y. - Everyone knew the Troy Trojans were a big, powerful team.

On Saturday night the Waverly Wolverines found out the Trojans are also a fast team.

Four long touchdown runs helped lead Troy to a 34-7 victory over the Wolverines.

For the Trojans it was a fun experience coming north of the border to a packed stadium for the game.

"There were packed stands, it was loud, the facility is fantastic, maybe the best facility around," Troy coach Jim Smith said. "We had a great time and I think we beat a very good football team."

Troy's players liked the atmosphere and also enjoyed seeing a sea of Troy fans in the stands.

"Our fans are great, they always support us," Brennan added.

The Trojans were right at home on the turf field with Brandon Mattocks showing off his speed from the start, with three long first-half scores. In the game Troy ran for 509 yards on 45 carries in the win.

For Mattocks it was a first half like he has never had before, running seven times for 177 yards.

"Not in my career," Mattocks said of having a half like that. "Our line did a great job today."

With a big size advantage the Trojans line took advantage all night opening up some big holes.

For Smith it was nice to see the line use their size to their advantage.

"You never know," he said. "You have a size advantage, but sometimes that can mean you have a speed disadvantage. Our kids up front on the line did a great job tonight."

Brandon Mattocks started the scoring at 9:39 of the first quarter when he broke free on the right side and was off to the races for a 54-yard touchdown.

Troy had a chance to add to the lead, but Troy had the ball pop straight up in the air on a running play and Josh Mastrantuono came away with the fumble recovery.

Troy's defense stepped up and Mattocks was at it again when he made a couple moves and was gone on a 76-yard scoring run with 2:06 left in the quarter. On both touchdowns Nick Stephani hit the extra point and Troy led 14-0.

"It made it a lot easier," Troy quarterback Isaac Havens said of having the early lead. "It got us going."

Mattocks added another score in the second quarter when he raced in from 39 yards out and the kick failed and with 3:41 left in the half it was 20-0 Trojans.

"Brandon Mattocks is one of the best athletes in the league," Smith said. "We are blessed to have some smaller, fast athletes and then some bigger, strong athletes. Brandon could do this almost every night, but we use a lot of different players."

While Troy was pounding the ball on the ground, the Wolverines were trying to go to work through the air with star quarterback Peyton Miller.

A few times in the first half the Wolverines offense had some chances downfield, but they were unable to connect on the big play.

For the game Miller finished 7-for-29 passing for 109 yards, a touchdown and an interception.

With Wellsboro, and all-state quarterback Michael Pietropola, coming up next week Smith knows it was a big help facing a top quarterback like Miller on Saturday night.

"It helps a lot," Smith said. "He's an outstanding quarterback, maybe the most athletic quarterback I have seen in a couple of years with both throwing and running. He gets the ball out fast. We did an outstanding job taking away everything except the vertical pass. They took a lot of shots downfield, luckily they weren't able to connect."

In the third quarter it was Havens turn to show off his speed as he took off on a 79-yard scoring run and Stephani hit the extra point and at 3:34 left in the third Troy went up 27-0.

The Trojans extended their lead in the fourth quarter when Havens ran in from two yards out and Stephani hit the extra point and with 4:16 left in the game they took a 34-0 lead.

For Troy it was another dominant effort by their defense in the game.

"We have some tough guys and they did a good job," Smith said. "It's good to see that our first-team defense still hasn't allowed any points."

Waverly avoided the shutout when Miller hit Shane Carpenter on a 36-yard pass and then he capped the drive with a nine-yard touchdown to Alex Volpe with 1:12 left. Zack Saxon hit the extra point for the Wolverines' seven points in the game.

Mattocks led the Troy offense with eight carries for 190 yards and three scores and three Trojans players went over the century mark rushing in the game.

Havens was 0-for-2 passing.

Along with his 109 yards passing Miller led the Wolverines with 24 yards on 12 carries as the Trojans limited Waverly to just 39 yards on the ground.

Saxon had nine yards on one carry, Brayden Rice had five yards on four carries, Jacob Goble had four carries for four yards and Brandon Bostwick had a yard on two carries.

The Wolverines don't have an opponent scheduled for next week after Trumansburg forfeited their season, while the Trojans make the trip out to Wellsboro on Friday night.

A year ago a loss to the Green Hornets cost Troy, who ended up winning the District 4, Class AA title, a shot at the league title.

Since last year Troy has been waiting for another shot at Wellsboro.

"We have been looking forward to this for a while," Mattocks said.

For Troy trying to win a league title this year is one of the goals.

"It's what we want to do, we missed it last year and it's our goal right now," Brennan said.