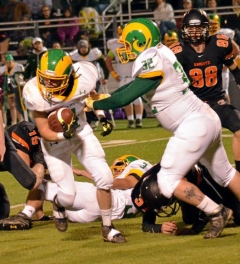 TOWANDA - The Bronze Helmet trophy stays in Towanda and the Black Knights punched their ticket to the District IV AA Playoffs next week with a 42-10 win over their arch rival the Wyalusing Rams.

After falling behind 10-7 in the opening quarter, the Black Knights defense pitched a shut out while the offense reeled off 35 unanswered points for the victory.

"After we settled down, I felt we played well in all 3 facets of the game" said Towanda Coach Jamie Wecker. "I was happy with the defense forcing a couple turnovers and I thought it was huge to get the ball first in the second half and score".

The Rams were without one half of their 1-2 punch at running back, with senior fullback Dylan Otis on crutches on the sideline, leaving the bulk of the running attack on the shoulders of Luke Jennings. He responded by carrying 29 times on the evening, but was never able to break off the big run as he has in almost every game this season.

He also coughed up the ball four times, which allowed Towanda to effectively shut down the potent Ram rushing attack.

Wyalusing received the opening kick, and put together a 14-play, 52-yard drive that culminated with a 28-yard Warner Mendoza field goal to go up 3-0 with 5:30 left in the first. Towanda would answer right back, as Steven Yates busted off a 44-yard run followed by Noah Huff's seven-yard touchdown run. Tyler Basse's PAT made it 7-3.

Starting on their 47, the Rams would need only four plays to retake the lead, with QB Justin Haley going over from two yards out at the 2:57 mark. Basse's PAT made it 10-7 and it appeared we were in for a shoot out.

The Knights went three and out, and it looked as if the Rams were marching to extend the lead, traveling 67 yards in 11 plays. But on second and eight from the 13, Jennings fumbled and Mitchell Peters recovered for Towanda, ending the threat.

The Knights would return the favor three plays later as Terron Millard recovered a Huff fumble on the 45. Unfortunately, Jennings would cough up his second turnover on the night, as Calob Benjamin recover for Towanda on the 38.

Both teams would then trade punts before Towanda put together an impressive six-play, 68-yard scoring drive, aided by a 32-yard completion from Huff to Yates. On second and nine from the Ram 10, Huff would complete a scoring strike to Dylan Bates, and Basse's PAT put Towanda up 14-10 as the teams headed into the locker room for halftime.

Receiving the second half kick, the Black knights took command of the game, Traveling 65 yards in 11 plays, Huff would sneak in on fourth down from the one yard line. Basse made it 21-10 at the 7:00 mark.

Another Jennings fumble on Wyalusing's first play would set up the next score, as the Knights traveled 65 yards in eight plays. Huff again found Bates on a three-yard pass, and Basse's extra point made it 28-10 with 4:17 left in the third.

The teams would trade punts into the fourth quarter before Huff again went to the air, connecting with Brandon McClinko on a 41-yard completion to the five. From there Yates went in to make it 35-10.

The Knights closed out the scoring with Huff's third TD pass, this time connecting with Tyler Vanderpool on a 38-yard catch and run, as Basse's final PAT made it 42-10.

Jennings led the Rams with 191 yards on 29 rushes.

Towanda will travel to Troy for the first round of District Playoff action next Friday night.