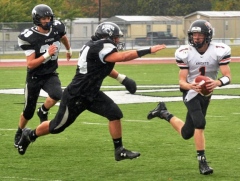 ATHENS - The Towanda Black Knights knew what they would accomplish if they defeated the Athens Wildcats on Saturday afternoon.

They knew they would record the 500th victory in school history, but for the players there was something just as important on Saturday.

The Black Knights wanted to bounce back after what they felt was a poor performance in a loss to North Penn last week.

Right from the start on Saturday the Black Knights let it be known that this wasn't last week as they jumped out to a 21-0 lead on their way to a 41-14 victory.

"It was a great game, it was great to bounce back from a bad game last week," senior quarterback Noah Huff added.

For the Black Knight players being a part of win number 500 is special.

For the players just being a part of the history of Towanda football is special.

"There have been so many great players, so for our senior class to get 500 is special," Place said.

Right from the start Towanda came out fired up as Huff started the scoring 6:56 into the game on a 23-yard touchdown run. Tyler Basse hit the extra point and it was 7-0.

After a quick four-and-out by the defense Steven Yates took the punt back 60 yards to the house and after Basse hit the extra point at 5:35 it was 14-0.

"From the get go we came out fired up and our defense had a lot more energy, speed and aggressiveness than last week," Towanda coach Jamie Wecker said. "We talked all week about playing with passion. We were firing on all cylinders in all three aspects and the players played hard."

Towanda added to the lead in the final seconds of the first quarter as Dylan Bates scored on a five-yard touchdown pass from Huff and Basse hit the extra point to make it 21-0 with nine seconds left in the opening quarter.

Bates led the Black Knights in receptions with three for 38 yards and a pair of touchdowns, but he also helped chip in with the run game, getting five carries for 10 yards in the game.

"Coach told me at the beginning of the week I would be getting more touches and I was kind of happy," Bates said.

For Huff and Yates having another back helping carry the load can only help them.

"It makes it much easier," Huff said. "It gives us more options now."

The Black Knights extended the lead in the second quarter when Yates scored on a five-yard run with 5:13 left in the half and Basse hit the extra point to make it 28-0.

Bates got his second score of the game at 1:34 of the half when he hauled in a 15-yard touchdown from Huff and Basse hit the kick.

After forcing an Athens fumble the Black Knights got the ball back and went right to work as Huff hit Noah Wheeler on a 14-yard touchdown with just 22.6 seconds left in the half. The kick failed and Towanda led 41-0 at the break.

While Towanda's offense was putting up points, their defense wasn't allowing the Wildcats much of anything.

The Black Knights held Athens to -35 total yards in the first half and the starting defense held Athens to -19 yards before giving way to the reserves midway through the third quarter.

Athens offense didn't have a first down until the third quarter.

"It was a great team effort in every aspect," Place said. "Our defense really played well today."

Wecker was happy with the effort by his defense in the win.

"You can't ask for anything more than that," Wecker said of his starters holding Athens to negative yards. "I was very pleased, it was a great job by the starters and it was great to get some of the younger guys in. It's a great learning experience."

With the reserves in the Wildcats ended the shutout in the third quarter when Payton Lewis gained 40 yards on four carries and then Sean Waltman capped the drive with a three-yard score. Austin Lister hit the extra point and it was 41-7 with 32.7 seconds left in the third quarter.

On their next possession the Wildcats gave the ball to Kalen Keathley on a reverse and he took off for a 27-yard touchdown. Lister hit the extra point with 9:39 left in the game for the final points of the contest.

Huff was 5-for-7 passing for 57 yards for Towanda with three of those five completions going for scores. Huff also gained 58 yards on 10 carries with a touchdown.

Yates had 52 yards on eight carries and Keegan Kisner had 20 yards on four carries. William Davidson gained seven yards, Nick Sutton four yards and Griffin Sites and Brandon McLinko each gained a yard. McLinko was 1-for-1 passing for a yard.

Forbes was 2-for-7 passing for 23 yards and Barry was 3-for-4 passing for 35 yards. Keathley had three grabs for 31 yards, Lewis had a 23-yard catch and Austin Lister had a catch for four yards.

Yates had an interception for Towanda.

For Wecker reaching the 500th victory is a special moment for Towanda football. Getting number 500 against Athens and coach Jack Young, just added another level to everything.

"Jack's dad got a good part of those wins," Wecker said of long time Towanda coach Jack Young Sr. "There are a lot of coaches here today that have been involved in a lot of the wins. Me, Mark Vail, Karl (Raffin), we have probably been involved in 120 to 130 of the wins so that's special.

"It's not just the coaches now, it's everyone that came before as well."

Wecker knows that the victory is special for the players.

"They can never take that away from them," he said. "As long as they live, they will have been a part of the 500th win."