Towanda holds on over Central Columbia. 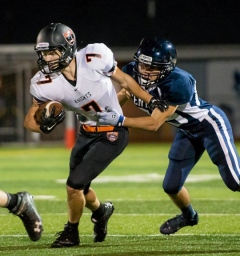 BLOOMSBURG - Battling for playoff position with a brutal three-game stretch of conference games to end the season on the horizon, Towanda could ill-afford a loss in Friday's non-conference game at Central Columbia.

Things did not look too promising, at least defensively, for the Black Knights in the first half but after an opening half full of offensive fireworks, Towanda kept its offense going for the most part while slowing down Central Columbia just enough and that along with some big defensive plays late in the game led the Black Knights to a 38-28 win over Central.

"Hats off to them, they've got some athletes and they're fast and our kids weren't ready for their speed at all. At the beginning of the game, they had us on the ropes and it was a track meet in the first half," said Towanda coach Jamie Wecker. "We did a few tweaks on our coverage (in the second half) but basically the kids just realized how much faster they had to be and how much quicker they needed to anticipate their routes."

The Black Knights were led by a trifecta of seniors offensively who accounted for all of the team's offense on the night. Noah Huff ran for 186 yards and three touchdowns on 21 carries and also threw for 40. Fellow senior captain Steven Yates also went over the century mark on the ground, going for 101 while senior Dylan Bates ran for 65 yards and two touchdowns and also hauled in three of Huff's seven completions on the evening.

"They raised their intensity level (in the second half)," said Central coach Jason Hippenstiel. "We had to overcome a lot of penalties tonight and that's frustrating for a lot of reasons. But Towanda is a very good football team and we know the Huff kid is just a star. He's as good as we've seen since (Loyalsock's Kyle) Datres. They certainly have some really nice athletes."

It looked early on that both teams might combine for over 100 points on the night as touchdowns were scored on the first five possessions of the game - three by Central and two by Towanda. Even after each team finally forced the other to punt for the first time in the second quarter, Towanda tied it 21-21 heading into halftime.

Huff's 44-yard touchdown run answered a 13-yard scoring run by Lewis Williams after Danny Koch returned the opening kickoff 64 yards. Central answered Huff's first score of the night with a 55-yard touchdown pass from Steve Shannon to Williams to retake the lead. Towanda answered with a 10-play, 55-yard drive the took nearly five minutes and was capped by Huff's second trip to the end zone. Koch then put Central back up with a 37-yard scoring run and Towanda later capped the first half scoring with a 2-yard run by Bates, his first of two on the evening.

"We made a stop there at the end of the first half and went in even and didn't make too many adjustments," said Wecker. "The kids really made more of the adjustments with their speed and became more physical and more aggressive. Offensively we could move the ball pretty well all night so once we got up, as long as we didn't make those mistakes, I felt pretty good that we could keep scoring and that's what happened and then the defense came up big a few times in the fourth quarter."

Towanda got the ball to start in the second half and methodically marched down the field, putting together a 10-play, 64-yard drive that took over four minutes was capped by Bates' second touchdown of the game to put Towanda up for good at 28-21. Towanda was also aided by a 15-yard personal foul penalty on Central, one of nine penalties for the Blue Jays on the night, including four 15-yarders.

Central had to punt on its ensuing drive and Towanda got a 27-yard return from Yates to set up their drive from the Central 27-yard line. Central stopped the Black Knights inside the 5 and Towanda settled for a 22-yard field goal by Tyler Basse to go up two scores, 31-21.

The Blue Jays answered back just before the end of the third quarter with a short drive capped by Koch's second touchdown run of the night from 15 yards to cut the lead to three, 31-28.

From there, Towanda put together another 10-play drive but this one was stopped by Central when Williams intercepted Huff, giving Central the ball at its own 15. The Blue Jays then put together a near 5-minute drive that featured two outstanding catches by Williams, including one for 26 yards that was a simultaneous possession with the Towanda defensive back to set up Central at the Towanda 48. But from there, the drive stalled as Williams was dropped for a loss on a second down running play and then Shannon was sacked by a blitzing Kalob Benjamin on fourth down.

Rather than trying to run out the clock, with Central still having two timeouts remaining, Huff ended up getting loose up the middle for a 31-yard run for his third touchdown of the night to put the game away with just over two minutes left.

"We've got three tough games ahead of us so this is a huge win to get us closer to the district playoffs," said Wecker. "We're probably real close right now being one of the lower seeds so this helps us as far as that goes."