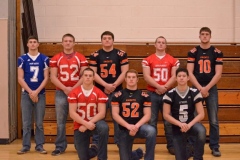 It was a record-breaking year for area football players, making the choices hard when it came to selecting this year's The Daily & Sunday Review All-Region football team.

Just a junior Tioga's Jesse Manuel broke the Section IV career rushing record this year and helped guide the Tigers to their third straight state final and he is this year's All-Region Player of the Year.

North Penn-Mansfield quarterback Bo Burleigh had the best season in school history, and one of the best in the district's history, in helping the Panthers reach the district final and he's the offensive player of the year.

Towanda senior Nick Place helped anchor the Towanda defensive line and he is the defensive player of the year, while Troy senior Dylan Brennan was the leader on a dominant Trojans line and he's the lineman of the year.

Notre Dame's Tim Davis had a strong season running and catching the ball and he's the newcomer of the year.

After North Penn-Mansfield reached the district final and won a share of the NTL large-school title this year, Tom Dickinson earned All-Region coach of the year honors.

In order to include more people on the All-Region teams players are selected for either their efforts on offense or defense. Each year a maximum of 2-3 players who dominated on both sides of the ball are selected for offense and defense on the first team.

Burleigh is the first-team quarterback and the running backs are Manuel and Luke Jennings of Wyalusing, who led the NTL in rushing.

Wyalusing's Dylan Otis is the first team full back and the receivers on the first team are Levi Christman of North Penn-Mansfield and Kalen Keathley of Athens.

Luke Kelly of North Penn-Mansfield is the first-team tight end.

The first-team offensive line is Brennan, Place (who makes it on offense and defense for his dominance on both sides of the line), Tioga's Dylan Babcock and Wyalusing's Dalton Chilson and Dustin Voda.

On defense the first team tackles are Michael Brostrom of Wellsboro, Jeff Klossner of Waverly and Takota Kelly of Troy.

The first-team defensive ends are Place and Babcock (whose dominance in leading Tioga to three state final fours earned him a spot on offense and defense) along with Kieron Smethers of Wellsboro.

The line backers are Dakoatah Manning of Towanda, Kyle Schucker of Troy, Noah Corwin of North Penn and Adam Zwierlein of Tioga.

The safeties are John Bowman of Canton and Tyler Forbes of Athens.

The corners are Bryce Zaparzynski of North Penn, Nick Marple of Wellsboro and Sam Burns of Tioga and Tyler Vanderpool of Towanda is the punter.

The second-team offense has Peyton Miller of Waverly and Diante Jones of Troy and Ethan Mead of CV at running back.

Nick Stephani of Troy is the full back and Tioga's Josh Kithcart is the tight end, while Dayton Wood of North Penn and Mason Moore of Canton are the receivers.

On defense the second team has Ben Davis of Wellsboro, Avery Chandler of Athens, Trey Gibson of North Penn and Josh Shoemaker of Wyalusing on the defensive line.

The linebackers are Cam Reid of Notre Dame, Joey Peters of Waverly, Nick Tremper of Wellsboro, Brad Jump of Tioga and Tyler Cole of Canton.

The defensive backs are Josh Mastrantuono of Waverly, Jake Lewis of Tioga, Kyle Jackson of Troy and Zack Sheppeck of Athens. Cody Cain of Athens is the punter.

The third-team offense includes Justin Haley of Wyalusing at quarterback and Ben Sherman of Troy and Luke Newman of Athens at full back.

The running backs are Tim Davis of Notre Dame, Steven Yates of Towanda and Levi Mack of Wellsboro.

Alex Volpe of Waverly is the tight end and the receivers are Noah Wheeler of Towanda and Shane Carpenter of Waverly.

The line includes Zane Fuller of CV, Ty Kunzman of Notre Dame, Joe Fox of Sayre, Mason Martell of Canton, Alex Felt of Sayre and Werner Mendoza of Wyalusing and Jack Chambers of Wellsboro are the kickers.

The defense has Justin Fiske of Tioga, Trevor Route of Canton and Dakota Corwin of CV on the line.

The linebackers are Brad Pequignot of North Penn, Zane Vargason of Athens, Dylan Bates of Towanda, Dylan House of Tioga, Michael Ward of Sayre and Brayden Rice of Waverly.

The defensive backs are Dayton Wickwire of Towanda, Ryan Kipp of Wyalusing and Joel Whitteker of North Penn and the punter is Connor Calaman of CV.