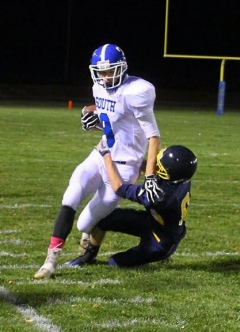 South Williamsport took a 56-0 lead at the half on their way to a 56-19 win over Cowanesque Valley on Friday night.

Riley Thomas caught a 53-yard touchdown from Matt Boone just 10 seconds in and Logan Wein had the extra point to make it 7-0.

Bragalone ran for 161 yards and two scores on seven carries and Peters had three carries for 75 yards and a score.

Brendan Bell had 10 carries for 20 yards for CV, Callaman had 53 yards on seven carries and Caleb Robbins ran four times for 29 yards.

Thomas hauled in five passes for 122 yards and two scores and Jones had two catches for 38 yards and a score for South.

Corwin had an interception for CV and Tommy Dunkelberger had a pick for South.