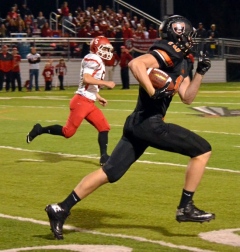 TOWANDA - The first half of Friday's game was the Noah Huff show as the Towanda quarterback scored three touchdowns and racked up more than 250 yards of total offense in the half.

In that half the Troy Trojans had few answers for Huff and weren't able to get anything going offensively as they trailed 21-0.

After the half everything changed as the Trojans scored 43 second-half points on their way to a 43-28 victory on Friday night in Towanda's Homecoming game.

"It was pretty incredible," Troy's Ben Sherman said of the comeback.

The second half started out with a bang for Troy as Brandon Mattocks took the opening kickoff back 91 yards and just 11 seconds into the half Troy had cut the 21-0 deficit to 21-7.

"Everything worked out the way it was supposed to," Mattocks said. "I had an opening and went. It (the return) did what it was designed to do."

The Trojans cut into the lead even more later in the third quarter when Nick Stephani scored on a 10-yard run with 3:42 left in the quarter. The extra point failed and it was 21-13 Towanda.

"They told us at halftime we have to play with heart," Kyle Schucker said.

For the Trojans everything changed after the break as the offensive line was able to start opening big holes and the running game picked up big yardage, gaining 427 yards on the game.

"We settled down," Schucker said. "We changed some things up front and it worked."

"Our mindset changed after the first half," Dylan Brennan said. "In the first half we were flat and dead and in the second half we came out and played football."

Early in the fourth quarter the Trojans tied the ball as Ben Sherman ran in from 24 yards out and Mattocks had the two-point run. With 11:05 left in the fourth it was 21-21.

Just 1:05 later Troy took the lead as Towanda went to punt from deep in their own territory and Schucker busted in and blocked the kick for the safety to make it 23-21.

"I knew we needed a block," Schucker said. "We called block and I was able to get a hand on it."

Troy took the kick after the safety and went right back to work as Sherman ran in from 51 yards out and just 51 seconds after they took the lead the Trojans were up 30-21 after the Stephani extra point.

Huff, who had 209 yards rushing on the day, wasn't about to let Towanda go down without a fight and on the first play of the next drive he went 80 yards for a score. Tyler Basse hit the extra point and Troy led 30-28.

It looked like the Towanda defense was going to hold and give the offense the ball right back, but on a fourth-down play Mattocks faked the punt and took off nine yards to get a first down.

After the fake Mattocks scored on a 16-yard run with 5:38 left and the extra point failed and with 3:05 left Mattocks had a 54-yard scoring run and Stephani hit the extra point to cap the scoring.

Huff tried to get Towanda going after that as he leaped over the Troy defense on a 20-yard run, but the Trojans' defense held to seal the win.

After starting running back Diante Jones left the game in the first half with an injury Mattocks took a bigger load running the ball, gaining 156 yards on 18 carries in the game.

And, after a first half which was dominated by Huff, the Trojans defense shut down the Black Knights for much of the second half.

"We came out in the second half and were more focused and ready to play defense," Mattocks said.

Towanda took the early lead in the first quarter with 3:26 left when Huff took a punt, cut past a number of Trojans and went 84 yards for the touchdown. Basse hit the extra point to make it 7-0.

Just 2:58 into the second quarter it looked like Troy had Huff stopped in the backfield, but he broke free from a tackle and took off 52 yards for a touchdown and Basse hit the kick to make it 14-0.

Huff added to the Black Knights lead with 5:10 left in the half when he took off on a 70-yard touchdown run and Basse hit the kick to make it 21-0.

Along with the 156 yards from Mattocks the Trojans got 96 yards on nine carries from Sherman. Isaac Havens had 86 yards on 11 carries for Troy and Stephani had eight carries for 28 yards.

Havens was 2-for-5 passing and Mattocks and Jones each had the one catch.

Along with the 209 from Huff on the ground Towanda got 10 yards from Steven Yates and eight from Dylan Bates.

Troy is at Athens next Friday and the Black Knights are at Wellsboro.