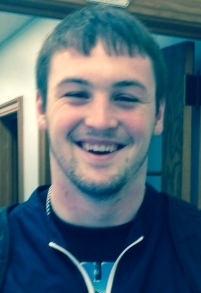 SAYRE - A four-year starter and multiple-time NTL all-star on both sides of the ball, Sayre senior Gabe Nobles will take his football talents to the next level in the fall for PSAC power East Stroudsburg.

Nobles said East Stroudsburg appears to be a good fit.

"They showed a lot of interest," he said. "They called me down for a visit, showed me the ropes and told me what they were all about.

"I had interest in them, so there was mutual interest.

"I really like the program," added Nobles. "It's a winning program."

He realizes playing at East Stroudsburg is not a sure thing.

"We are required to try-out, but they give us a lot to work with to get ready."

Nobles said the work deals with improving "speed, strength and all the intangibles.

"I told them I wanted to play linebacker and they gave me a set of numbers I should be at.

"I've been working pretty hard over the winter to meet those numbers when I get down there," he said.

Nobles knows everyone he'll be vying for time against was a league all-star and relishes the opportunity to prove himself.

"I look forward to it. I will actually have to work hard," he said. "Having guys there who are better than I am, gives me goals to set. Plus, they can help me get better and I can help them.

To get on the field, Nobles is working on his weaknesses.

"I've been working on my speed," he said. "Going from the high school environment to college, the speed of the game is totally different.

"I've been working on strength, too, but mainly on speed, especially as a linebacker you have to meet the running back at the hole before he meets you," added Nobles.

He also notes East Stroudsburg does everything it can to help freshmen acclimate to the college life.

"They have a 'big brother' system, a senior is assigned to a freshman and they act as a mentor."

Nobles also has an added advantage as he heads to college, with classmate Jeremy Kyc also playing at East Stroudsburg next fall.

"I think it will be really helpful. We've been working out together and we'll be rooming together down there.

"I think it will be good to have someone I know there to work with, to better ourselves and represent the community," he said.