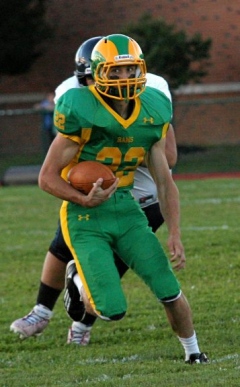 WYALUSING - The Wyalusing Ram football program has a proud history of playing tough defense and running the football.

Of all the great running backs to carry the rock through the years, none carried it farther in a single game than Luke Jennings did in last night's opener. The junior slashed his way to 373 yards on just 17 carries with four touchdowns in setting the record as the Rams won easily 63-6 over the visiting Sayre Redskins.

"It felt awesome," said Jennings after the game, but quickly added, "I have to give all the credit to my linemen. They did a great job, it was a total team effort. I'm just the one who gets to carry the ball."

Despite the lopsided final score, it was the Redskins who drew first blood, as Alex Felt took a Dylan Otis fumble and rambled 80 yards to put Sayre up 6-0 with 2:45 left in the first quarter.

On the Rams next play, he took the handoff on an inside counter and weaved his way 73 yards for the score. Warner Mendoza added his first of many PATs on the night, and the record setting night was "on." Jennings had 154 yards by the end of the first quarter, and 237 by halftime.

"We knew what he was capable of," said Head Coach Jim Buchman when asked about Jennings' performance. "He came in fired up and ready to play."

They would pick up in the second half right where they left off, as on their first play from scrimmage Jennings went 52 yards to put them up 35-6. Following a Derrek Frederick interception, Otis scored his second TD on the night from five yards out, and the mercy rule went into effect with a running clock at 7:01 of the third quarter.

Coach Buchman realized he hadn't given his QB any work, and called two consecutive pass plays resulting in an eight yard TD toss from Justin Haley to Otis to put the Rams up 49-6 with :56 left in the third.

Sayre would fumble the next possession right back, and Otis would need only one play to cover the 15 yards to pay dirt for his 4th score on the night and a 56-6 lead. Jennings closed out his record setting night in style as he tore off a 76-yard run for his 4th and final TD on the night to set the final at 63-6.

"We can't let this win inflate our heads," said Coach Buchman afterwards. "We're only 1-0, we are going to go back to work and prepare for Montgomery like we are 0-0."