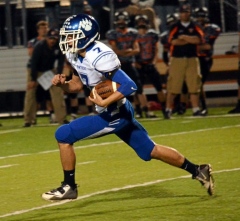 TOWANDA - There was no doubting that the Panthers were too much for the Towanda Black Knights last night.

Their defense was relentless, their offense was unstoppable, and no matter how hard the home team tried, they just couldn't muster up enough momentum to pull ahead of North Penn.

The visiting team would receive the opening kick-off, and from there they wasted no time when it came to putting points on the board. An eight play drive would give the Panthers their first opportunity to score, when on fourth and fifteen, quarterback Bo Burleigh threw the 22 yard touchdown pass to teammate Dayton Wood. The two point conversion attempt was no good, and only three minutes into the first quarter, the Panthers led 6-0.

Towanda seemed promising when it came to moving the ball offensively, but they just couldn't score. Their first 13 play drive would give the ball back to North Penn after an incomplete pass from Noah Huff on fourth and nine. From here, all the Panthers needed was a couple complete passes from Burleigh to set them up at the Towanda 23, where again Burleigh would throw a touchdown pass - this time for 23 yards and with 1:52 left to play in the first. Again, the two point conversion was no good, and the Panthers extended their lead, 12-0.

On the Knights' next drive, Tyler Basse would attempt a field goal on fourth and 10, but the home team would fall short and with 11:50 remaining in the half, the score would remain the same.

Again, North Penn would waste no time when it came to adding to their lead. This time, though, it only took three plays. On third and three, senior Bryce Zaparzynski would pull away with an impressive 73 yard score. And again, the visiting team would try for the two point conversion, but fall short. With 11:07 left in first half action, the Panthers led 18-0.

Nothing had changed when the Black Knights received the ball this time around. Their ball movement was impressive, but Huff would throw another incomplete pass on fourth down, giving the ball back to the opposing team.

The last two possessions for each team for the remainder of the half lacked any scoring, and the two teams would head into the locker room with the scoreboard still reading 18-0.

Coming out of halftime, the Knights seemed to be determined to prove that at the very least, they showed up on that field last night. Noah Huff started out the drive by completing a 12 yard pass to teammate Tyler Vanderpool, setting Towanda up at their own 49. From here, Huff and Steven Yates took turns running the ball, until on second and seven from North Penn's 20, Dylan Bates ran it in for the score. Basse's PAT was good, and the Knights were finally on the board, 18-7.

The Panthers answered right back on their next drive. One key play - a completed 65 yard pass from Burleigh to Luke Kelly - allowed for the Panthers to have first and goal on the four yard line. From here, Zaparzynski, quickly avoiding Black Knight defenders, raced into the end zone for the score. On this attempt, the two point conversion was complete with another run from Zaparzynski, and with 7:13 left in the third quarter, North Penn still led 26-7.

Towanda would punt on their next drive, and the Panthers would receive the ball at their own 13 yard line. It took a little more will power this time to pull away with the score, but the visiting team managed to do just that. On third and goal (and on play No. 14), Burleigh would complete another TD pass, this time to Levi Christman with 11:00 left in the final quarter. As if the last two point conversion success was their motivation, the Panthers went for it again, and another run from Bryce Zaparzynski gave it to them. North Penn now led 34-7 with a minute gone in the fourth quarter.

Right about then the Panther defense seemed to loosen their reigns a bit, allowing for another Towanda touchdown. The Knights used their skills in both running and passing to come to first and goal on the three, where Noah Huff would run in for the score with 6:43 remaining in the game. Tyler Basse's extra point was good, and the Panthers' lead was cut to 34-14.

Despite the gain on the scoreboard for the home team, the opposing one used a 10-yard penalty on behalf of the Knights to their advantage on their next drive. All it would take was a couple carries on part of Zaparzynski, and North Penn would have the ball on the Towanda 11, where again Zaparzynski would run in for the score. The two point conversion attempt was no good, and with 5:25 left in the fourth, the Panthers still led, 40-14.

Despite the numerous amount of penalties throughout the game on part of both teams, the Knights managed to keep their heads and put up seven more points on the scoreboard. A Steven Yates kick return would set Towanda up on the North Penn 12, where Huff would complete a short six-yarder to Yates. From there, Yates would easily cross the line into the end zone with 5:01 left to play. Basse's PAT was good yet again, and the final score was set at 40-21.

The Panthers' Bryce Zaparzynski led all rushers with 200 yards on 22 carries. Next week, North Penn hosts Warrior Run and the Black Knights travel to Athens.