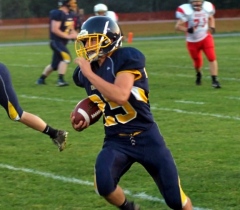 WESTFIELD - Cowanesque Valley grabbed their first win of the season in royal fashion with a 42-0 win over Bucktail in a game that could have been entitled the "King and his Quarter."

The Indians scored all their points in the first quarter - with four coming from four-year starter Ethan Mead - but Mead also grabbed Homecoming King honors with Sierra Marzo as the Homecoming Queen.

"We've been on the losing end of games over the years," Mead said. "It's good to be on top in a game like this. We came out with a 'W' and it's good to win Homecoming in your senior year."

After stopping the Bucks on their first possession, Cowanesque Valley wasted no time getting on the scoreboard. Connor Calaman took the ball on the first play and raced 90 yards along the home side of the field for the score for the early 6-0 lead.

After stopping Bucktail again, after five straight carries by Aaron Ransdorf, the Indians went to work again in quick fashion. This time Mead took the first handoff on the possession and raced 72 yards for the score. Mead ran up the middle for the two-point conversion and a 14-0 lead.

Mead then took the first hand off of the next possession and sped down through the center of the Bucktail defense for 80 yards and he also added the PAT with 3:31 left in the quarter.

"It's like the gates of heaven," said Mead. "That's what it felt like going through the line untouched like that. The guys on the line did a great job opening things up."

Not to be outdone, the defense got into the act when Brendon Bell intercepted a pass from Blake Gavlock and returned it 15 yards to the 19-yard line.

Not to sound like a broken record, but Mead took the first handoff of the possession up the middle for a 19-yard touchdown jaunt and then added the extra-point for a 28-0 lead with 2:33 left in the first. Bell wasn't going to leave things to Mead again on Bucktail's next possession. Once again, he intercepted Gavlock, but this time Bell rumbled 45 yards for the score for a 34-0 lead with 2:08 remaining.

The Indians forced Bucktail to punt on the following possession and Mead went to work on the return, zigzagging across the field for 68 yards on the return for Cowanesque's final touchdown with 1:31 remaining in the half and Mead capped the drive with a run for the conversion.

Mead finished the night with three carries for 169 yards and a 68-yard punt return for 237 total yards. He also tallied 31 points on the night.

Bucktail started the second half with a 13-play drive that, unfortunately, ended with a fumble by Gavlock on the 4-yard line. Chris Cope made the recovery.

The lone bright spot for the Bucks might have been Randorf, who carried the ball 19 times for 64 tough yards.

"Bucktail has some talent, but they're limited," said CV head coach Ernie Bieser. "We know that's it when it's tough to field a team."

The Bucks only had 21 players on their roster, not counting injured players.

Bieser can see the momentum building after starting the season with arguable the two best teams in the area - Wellsboro and Troy --and then falling late in the game to Muncy 13-6.

"We played well against Muncy," Bieser said. "The kids worked hard this week even with homecoming and a lot of distractions. We hope to keep the momentum going. We'll see what happens."

"We are looking for a hard week of practice for Montgomery," Bieser added.