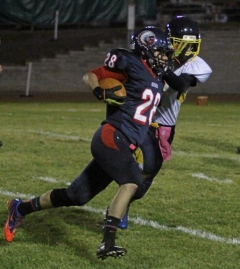 Sayre's Michael Ward scored on a 3-yard touchdown run to give the Redskins a 28-21 win over Cowanesque Valley in NTL Small School football action Saturday.

Ward finished the day with 16 carries for 123 yards while Garrett Weaver had eight carries for 107 yards, all in the second half.

Marshall Felt was 3-for-7 for 31 yards through the air for Sayre.

The Redskins overcame 19 penalties for 130 yards in the victory.

CV's Ethan Mead had 17 carries for 61 yards to lead the Indians while Joey Brown was 5-for-9 for 63 yards through the air with a touchdown.

In Sayre's opening score they went 61 yards in six plays to score at the 8:56 mark of the first quarter. JP Harbst keyed the drive with a 14 yard catch and a 23 yard run.

Just before the end of the quarter Tylor Bellis scored on a 25-yard run to finish off a five play, 62-yard drive. Ward had a 31-yard run to set up Bellis' touchdown.

The Redskins took a 13-7 lead into the second quarter.

In the second CV answered as Mead punched one in from a yard out with 10:01 left in the half to knot things up at 13-all.

The play was keyed by a Brown kickoff return to the Sayre 31 where they needed eight plays to score from. A roughing the passer call kept the Indian drive alive on third and long.

Then in the third quarter CV took the lead as Mead caught a screen pass from Brown and scampered 33 yards for the touchdown with 6:34 left in the quarter. Mead ran in the 2-point conversion to give the Indians a 21-13 lead.

CV started the half with good field position as Sayre failed on an onside kick. Penalties once again hurt the Redskins as they were called for a late hit and twice for unsportsmanlike conduct to move the ball to the Redskin 10.

Sayre would force them to turn it over on downs but then fumbled on their ensuing drive, giving the ball back to the Indians. CV then scored on a 4th-and-21 play to Mead who reversed fields and took it to the house.

Then with 3:17 left in the third Weaver scored on an 8-yard play. He then punched in the 2-point conversion to knot the game up at 21-all.

Then in the fourth quarter Ward recovered a CV fumble at his own 40. From there they went 60 yards on four plays behind a Weaver 42-yard run and a Ward 20-yard run to set up Ward's game winning touchdown punch.