Knights rally past Hughesville in OT. 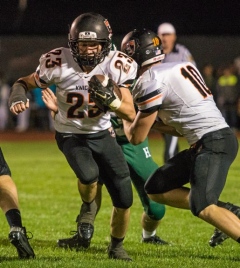 HUGHESVILLE - The last time Towanda made the trek down to Lycoming County two weeks ago, it left with a lopsided loss to South Williamsport in a game that was never close and had no drama at all.

Friday night's game with Hughesville was a polar opposite of that game in every way possible. It featured momentum swings, big plays on both sides of the ball, plenty of penalties and clutch kicking. In the end, Towanda rallied from a 10-point deficit in the fourth quarter to force overtime and then stopped Hughesville from the one-yard line on its overtime possession before kicking a game-winning field goal to walk away from Hughesville with a 30-27 overtime win, handing the Spartans their first loss of the season.

"This game really spanned the entire range of emotions," said Towanda coach Jamie Wecker. "We matched up well in the first half, then the wheels came off in the second half and they were really sticking it to us. Our defense struggled to adjust but then we did make some adjustments and got some stops and our kids really weathered the storm and I'm so proud of how they bounced back after some adversity."

That adversity started about midway through the third quarter and lasted into the fourth quarter before the Black Knights were able to get back the momentum. Towanda held a 17-13 lead midway through the third quarter before things took a turn for the worse. First, Hughesville put together a 10-play, 59-yard drive capped by Clint Snyder's one-yard run to go up 20-17. On the ensuing kickoff, Towanda's Noah Huff, who ran for 153 yards in the game and threw for 96, returned a kickoff 64 yards but it was called back due to a block in the back penalty. After a false start on first down pushed the Knights back to their own 15, Huff was picked off by Snyder at the Towanda 24 and Snyder returned it to the Towanda one-yard line. Snyder then ran it in for his second touchdown of the night on Hughesville's first play after the interception to make it 27-17.

A personal foul penalty on Towanda after the touchdown allowed Hughesville to kick off from Towanda's side of the field, and the Spartans decided to onside kick it and they were successful, recovering at the Towanda 17 after Knights were unable to secure the ball.

Hughesville then ran nine plays but they only resulted in a net gain of two yards due to negative yardage plays and a delay of game penalty, leading to a 32-yard field goal attempt that was missed by Trent Woolcock. That missed kick would prove to be big as would a missed PAT that came earlier in the game after Hughesville had scored a touchdown on its first drive of the third quarter.

That miss allowed Towanda an opportunity to take back the momentum, which it did as it put together a nine-play, 80-yard drive that was capped by Noah Wheeler's near one-handed catch across the middle for a touchdown with 7:29 remaining, pulling the Knights to within three at 27-24. That drive featured four separate personal foul or unsportsmanlike penalties - two on each team, which were four of the 21 total penalties on the evening.

The Spartans then took the ensuing kickoff back to midfield but went three-and-out as quarterback Logan Henry was sacked on a third down play to force the only punt of the night for Hughesville.

Towanda then took over on its own 36 and put together another long drive, this one going 56 yards in 14 plays over 4:54. After being stalled at the Hughesville eight-yard line, Tyler Basse was brought in to kick a 26-yard field goal, which he nailed and would have been good from further out to tie the game with just :15 left. Hughesville then nearly had an improbable ending as Nick Yeager got free on a third down rushing play on the ensuing possession and went 42 yards all the way to the Towanda 33 before being knocked out of bounds by one of the last defenders downfield and the game went to overtime.

Yeager ran for 142 yards on just 10 carries for Hughesville - all in the second half. He had runs of 35 yards and 25 yards on the Spartans' first two plays of scrimmage in the second half, the latter going for a touchdown, but it was following that touchdown that the missed PAT occurred.

Hughesville took possession first in the extra frame and picked up six yards on first down and two on second down, giving them two plays to get two yards for the touchdown. They were stopped short of the goal line on third down and then elected to go for it on fourth down rather than kicking the field goal but Towanda rushed through the line of scrimmage to stuff Snyder for a one-yard loss.

"We got into a formation that we haven't showed very much of and they adjusted well to what we were doing," said Hughesville coach Dan Tucker of the fourth-down play.

"We bumped into our short-yardage defense and after 48 minutes of football, that was a huge play for our defense to make," said Wecker.

The Knights were then pushed back by an illegal block penalty on their first play of overtime, their 12th of the night. Towanda got the ball down to the three-yard line by fourth down and Basse once again came up big for the Knights as his 20-yard field goal once again would have been good from much further out.

"Our offense did a great job to put us in position to kick the field goals, both in the fourth quarter and overtime," said Wecker.