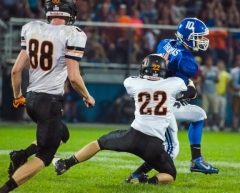 The Towanda Black Knights traveled to South Williamsport Friday evening to square off with the Mounties in week two of the high school football season.

Towanda was fresh off a week one victory as South Williamsport was seeking their first victory of their football campaign.

Towanda offered no response for the dominate play on both sides of the football by South Williamsport. The Black Knights struggled both offensively and defensively all night as the Mounties had their way, defeating Towanda 42-0.

The Black Knights had so solutions in stopping senior standout Dominick Bragalone III. Bragalone only touched the football eight times all game, but that was enough to bury the Black Knights.

Bragalone had 259 rushing yards on his eight carries and scored on 50 percent of his touches, finding the end zone four times.

Matt Boone, quarterback of the Mounties, had a strong game throwing the football as well. He went 5-for-7 for 141 yards and a touchdown.

Noah Huff tried to boost the Black Knights' offensive as he carried the ball 14 times for 109 yards. He also went 5-for-18 throwing the football for 26 yards. His efforts would become no match for the stellar defense of the Mounties.

The scoring came very early and often for South Williamsport. On the very first play of the entire game, Bragalone took the handoff, found a hole produced by his offensive line, and would go untouched all the way to the endzone for a 65-yard run.

The Mounties' next drive would consist of more than one play. After a few attempted rushes, Boone flipped the ball to his right into the hands of Bragalone who again would go untouched into the end zone for his second touchdown on the evening, this one an 11-yard rush.

The Mounties' defense forced another punt which bounced across the goal-line for a touchback. The Mounties went to work on their own 20-yard line.

It was another one-play drive for South Williamsport. Bragalone took the handoff on his own 20-yard line. Heading to his left, he hit the corner and outran a host of Black Knight defenders. 80 yards later he found himself in the end zone for touchdown number three on the evening,

South Williamsport forced a turnover-on-downs to get the ball back on their own 18-yard line. There was no need to worry however, with an 18-0 lead, they gave the ball to Bragalone, who once again, outran the entire Towanda defense for his longest run of the night, an 82-yard touchdown and his fourth and final score of the night.

With Bragalone seeing limited action at this point of the game, it didn't stop the Mounties' offense from putting points on the board.

The Mounties would look to throw the ball deep down the field on their next drive. On the first play of the following drive, Boone tossed a pass over the middle of the field, over the head of the deepest Black Knight and perfectly into the hands of Riley Thomas for a 50-yard reception. Following a rush attempt, the Mounties tried the deep ball once again. Boone threw a perfect ball over the shoulder of Thomas who had a step on his defender. Thomas would make the reception in the endzone as the Mounties would go up 30-0.

Brock Jones of South Williamsport positioned himself under a Huff pass that was tipped at the line-of-scrimmage for an interception giving the Mounties great field position yet again.

Following a few rushing attempts, John Peters took the football from Boone, rolled out to his left, shed one defender, and found his way across the goal-line 13 yards later.

Huff and the Black Knights would try to get a few points on the board before halftime. Huff tried to thread the needle to a receiver along the sidelines. Peters stepped in front of the pass for the interception.

After a lengthy pass between Boone and Tyler Schonewolf, Boone would take this one himself into the endzone for the Mounties seventh and final touchdown of the football game with 14 seconds left on the clock before halftime.

All the points scored during the game took place in favor of the Mounties in the first half of the game. Neither team would score a point for the remainder of the game.

The Mounties finished the game with 501 total yards of offense as they held Towanda to just 184 yards.

Towanda will look to bounce back next Friday evening as they welcome Bloomsburg at home.

South Williamsport will hope to duplicate their performance next Friday evening as well as they travel to Canton to take on the Warriors.