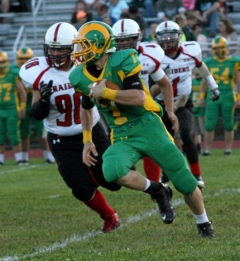 WYALUSING - The Wyalusing Rams scored their second impressive home victory in as many weeks as they crushed the visiting Montgomery Red Raiders 62-0 in Friday's non-league match up at Peterson Stadium.

For the second week in a row, the Ram rushing attack was virtually unstoppable, as nine different ball carriers took turns racking up 453 yards on the evening.

As impressive as the offense was, the Ram defense held Montgomery to three total yards in the first half, and 40 total yards for the night.

"Our defense played very well," said head coach Buchman. "We knew coming in that Montgomery had speed, we focused on wrapping up and tackling well. I thought we did a good job of containing their speed."

Junior tailback Luke Jennings picked up where he left off last week, rushing for 255 yards on just eight carries while scoring four times, all in the first half, a nice encore to his record setting opener last Friday night.

The Rams received the opening kick, and after two long runs each by both Jennings and Collin Edsell, they found themselves with first and goal at the Red Raider five. Two short runs by Dylan Otis, the second a one-yard plunge, followed by a Warner Mendoza PAT gave the Rams a 7-0 lead with 9:16 left.

Following the first of many three-and-outs for the Montgomery offense, it took just one play to add to the lead, with Jennings taking a toss over the right side and weaving his way 30 yards for the touchdown. Mendoza was wide right, and the score was 13-0 at 7:22.

The next Ram drive covered 67 yards in 6 plays, with Jennings again working his magic on a 33-yard scamper to make it a three score lead. Otis would run in the two-point conversion, making it 21-0 with 2:47 left in the first quarter.

Following another Montgomery punt, Jennings added to his resume with a 53-yard jaunt, criss-crossing the field and utilizing all his down field blockers to make the score 28-0 at the 11:20 mark.

The following series saw Coach Buchman go to the air, as quarterback Justin Haley connected with Jennings on a 21-yard hook up. To spread the wealth, Haley called his own number and scored from a yard out to make it 35-0 at 6:11 of the second.

The next score belonged to Otis, capping a four-play, 35-yard drive with a three-yard plunge. Mendoza's PAT made it 42-0 with 2:4 left and plenty of time for one more score.

Jennings would do just that, covering 63 yards on his final catty of the night, sending the team to the locker room up 48-0.

The mercy rule in effect, the second half moved quickly, although in much the same fashion. With Coach Buchman substituting freely, back up players took the spotlight and continued to produce. Back up quarterback Derek Fredericks connected with Isaac Bennett on a 23-yard touchdown to widen the margin to 55-0. And back up tailback Ryan Kipp finished the scoring with a nine-yard touchdown run of his own.

The Rams will take their unblemished record on the road next week to Warrior Run for another non-league matchup on Friday night.