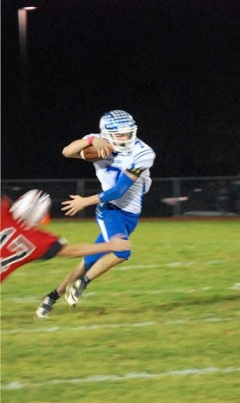 Trevor Route stood in the shadows of the uprights. The lights were beaming down, the crowd quieted with all eyes on him.

He took his normal steps back, took one last deep breath as the ball was snapped and placed before him. With one swift swing of his foot he had won Canton the football game and handed North Penn-Mansfield their first loss of the season.

The Canton Warriors welcomed the Northern Tier League leading North Penn-Mansfield Panthers Friday evening in a game that would end in dramatic fashion.

The previously undefeated Panthers were handed their first loss of the season after beginning with seven wins and zero losses at the hands of the hosting Warriors. Twenty-one combined points were scored in the last one minute and 41 seconds of the football game.

Warrior quarterback John Bowman connected with wide receiver Mason Moore in the corner of the end zone with just seven seconds remaining to tie the game at 36 all.

It came down to the point after attempt. The dream of any kicker, the ability to go out there with the game on the line and split the uprights to win the football game and begin the celebration.

Both teams threw the ball 25 plus times on the evening. Both teams also accumulated 200 plus passing yards as well. For the Panthers, the passing game resulted in four touchdowns. However, for the Warriors, despite throwing the football 31 times, the majority of their success came behind the legs of running back Tyler Cole.

The result of the Panthers was the almost exact opposite. Quarterback Bo Burleigh threw for 4 touchdowns including, at the time, the go-ahead score with a minute and five seconds left of the clock. Bryce Zaparzynski scored the lone rushing touchdown of the evening for the Panthers.

Zaparzynski was the leading rusher for the Panthers carrying the football 12 times for 72 yards and a score.

Levi Christman was a major part of the Panthers offense as he had eight receptions for 103 yards and two touchdowns to lead all receivers. Teammates Zaparzynski and Dayton Wood each had three receptions and 51 and 66 receiving yards respectively to go along with a touchdown a piece.

The first points of the football game would not have been scored until there was a little over a minute and a half remaining in the opening quarter. The Warriors forced the Panthers to a three-and-out as they forced them to punt the football away. Cole settled under the football as he would rattle off a big return to Canton's own 20 yard line. He would later be rewarded for his work as he pounded the ball up the middle two-yards into the end zone for the opening score of the game. The point after attempt would be missed as Canton jumped out to a 6-0 lead.

Their lead would become short lived as just about two minutes later, Zaparzynski would score a two yard touchdown of his own and then he would convert the two-point conversion to put the Panthers up 8-6.

The Warriors would respond quickly using their next drive to find the end zone for the second time. Again, they handed the ball off to Cole who hit the corner, ran through a few arm-tackles, stiff-armed another defender, and even dragged one with him across the goal line, all from 39 yards out and his second touchdown of the evening. The Warriors would line up for the point after but instead of kicking it, they direct snapped it to the up-back who would fail to convert on the two-point conversion. The Warriors led 12-8.

Canton would line up to kick off with a little less than nine minutes remaining in the half. They would execute an onside kick to obtain possession of the football.

They would not be able to convert on the opportunity however, turning the ball over to the Panthers on a failed fourth down attempt. The Panthers would use this drive to find the end zone for their second time.

Burleigh would score the first of his passing touchdowns on this drive as he found Christman for a 27-yard connection and a score. They again would go for two but would fail to convert. They would take a 14-8 lead.

North Penn-Mansfield would strike again before halftime. This time Burleigh connected with Zaparzynski on a screen who would make a few defenders miss on his way, 28 yards later for the score. They would go for another two-point conversion but would again, fail to convert. The Panthers led 20-12 heading into halftime.

Canton would receive the opening kickoff of the second half but Cole would put the ball on the ground as the Panthers were able to fall on it. The Panthers would use the momentum to score yet another touchdown as Burleigh connected with Christman again for a four-yard score. Burleigh would find Bradley Pequignot on the wheel route to convert the two-point conversion and put the Panthers up 28-12.

Canton would then score 18 straight points to eventually take the lead.

The first came on a four-yard carry by Barnett with 8:27 left in the third quarter. Canton would attempt the two-point conversion but again would fail. The Panthers led 28-18.

The Warriors would then force the Panthers to a three-and-out and would drive 72 yards. They would not score on this drive as, on their own nine yard line, Bowman tossed a pass into the end zone that would be picked off by Wood.

The Warrior defense would hold strong and force the Panthers to another three-and-out.

Canton would convert three third down conversions on their next drive to set up another touchdown for Cole from seven yards out. The point after attempt was no good. The Warriors were inching their way back into the game, down 28-24.

On North Penn's next drive, they were nearing another touchdown to extend their lead. From 36 yards out, Burleigh connected with Wood on the one yard line. The Canton defense would come through in a big way in what might have just been the play of the game forcing a fumble into the end zone that was recovered by the Warriors for a touchback.

A few drives later the Warrior offense took the field with 6:15 left in the game. They would use the majority of the clock along with converting three third down conversions to eventually find the end zone for the go-ahead touchdown. Cole pounded in his fourth touchdown of the game from 10 yards out. The point after was no good as Canton took a 30-28 lead with 1:41 left in the game.

With the home fans on their side, the Canton defense looked to secure the victory by shutting down the Panthers on their next drive. The Panthers, with the aid of some crucial Canton penalties would drain the life out of the crowd for the time being as Burleigh connected over the top with Wood who would receive the 29-yard touchdown pass. Burleigh would keep the ball himself and convert the two point conversion, putting the Panthers up 36-30 with just 1:05 left in the game.

The Warriors had 75 yards to go, no timeouts, and were without Cole who was ejected from the game on a personal foul on the previous drive. Neither of these things were a factor for the Canton offense who used two huge pass plays, one on third down between Bowman and Bryce Cole for 21 yards and another between Cole and Travis Butcher for 25 yards. The Warriors' first attempt at a game winner was placed just out of the reach of Moore. The second attempt, with just seven seconds left on the clock, could not have been placed any better.

Bowman threw a ball over the defender's head and over the shoulder of Moore who would haul it in to tie the game at 36 all. The game was won behind the foot of Route who converted the game winning point after.

Canton will look to keep their winning ways going as they host Cowanesque Valley next Friday evening. North-Penn Mansfield will host Wyalusing next Friday as well.