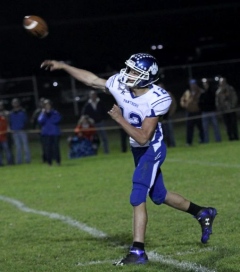 TROY - It lived up to all the hype and then some. The undefeated and defending District IV champion Troy Trojans and their powerful ground attack locked horns with the undefeated North Penn Panthers and their vaunted aerial attack last night at Alparon Park.

When the dust settled, it was the Panthers who prevailed, led by QB Bo Burleigh's 405 yards passing and four touchdowns that ruined the Trojans homecoming to the tune of a 44-33 win.

"Our offensive line really did the job tonight, they gave Bo the time he needed to throw," said an excited North Penn head coach Tom Dickinson afterward. "We knew coming in how good Troy's defense had been this season. I told the kids we needed to score early and keep the advantage, and we were able to do that tonight."

Both teams started out the game with long drives, the Panthers marching 49 yards in 7 plays but stalling on 4th and 4 from the Troy 9, while the Trojans took their initial drive 81 yards before being intercepted in the end zone. It would be a preview for the entire evening as both offenses moved almost at will for all 4 quarters. The Panthers would draw first blood as on their second possession Burleigh would connect with Bryce Zaparzynski on a 3-yard swing pass to open the scoring 6-0 with :18 left in the first.

Troy would take advantage of their first of many good kick returns, setting up shop on the 49. From there the "ground and pound" went to work, churning out 51 yards on 10 straight run plays, with Ben Sherman going in from 8 yards out. Nick Stephani's PAT was true, and Troy led 7-6.

North Penn would counter with a 10 play 75-yard drive keyed by a 30-yard completion from Burleigh to Zaparzynski. Burleigh would then take it in himself from 3 yards out, and his 2-point conversion pass put them back on top 14-7 with 4:33 left till half.

Troy's second big kick return set them up at the Panther 48 where 4 straight run plays took them to the 3-yard line. From there Chance Lantz would bull his way in and knot the score at 14.

The Panthers shotgun-spread hurry-up offense would serve them well on their next drive, as they needed only 90 seconds to regain the lead. Burleigh connected with Luke Kelly on a 55-yard strike, as Kelly dragged a Troy defender the final 5 yards into the end zone. Brad Pequignot ran in the 2 point try, and it was 22-14 with only :34 left until half.

Fortunately for Troy, Diante Jones would only need nine of those seconds to close the gap.

The Panther kickoff coverage woes continued as Jones took the short kick up the gut behind a wall of blockers and raced nearly untouched for the 65-yard score.

A Jones try for two was stopped short and the scoreboard now read 22-20. The Panthers nearly extended the lead as Burleigh connected with Dayton Wood who was tackled on the Troy 3-yard line as the first-half clock expired.

The second-half fireworks picked up where the first half left off, as Burleigh continued his hot hand, hitting Zaparzynski with a 61-yard scoring strike and running in the PAT himself to make it 30-20. Once again, Diante Jones was the answer to the question "How will Troy respond?" as he returned the ensuing kickoff 50 yards and then took the first down handoff and raced 31 yards to paydirt. A Chance Lantz conversion run was stuffed and the Panther lead was now 30-26 with 7:12 left in the third.

Burleigh to Kelly would again burn the Trojan secondary, as they connected for a 66-yard gain to the 5-yard line. A 4-yard run by Zaparzynski was followed by his 1-yard plunge to extend the lead to 10 at 36-26.

"We just couldn't get our defense off the field on any third and long situations, they made play after play," said a dejected Coach Smith after the game.

The Panther coaching staff decided the least dangerous solution to their kicking game was to squib kick right at the Trojan upmen, which they did with success on the ensuing kickoff. The downside to that strategy was that Jones would only have to race 55 yards for his next score, which he promptly did on the first play. Stephani's extra point made it 36-33, and the game had the feel that the team with the ball last would be the winner.

North Penn's next drive covered 63 yards. Unfortunately they needed 64, as Burleigh's 4-yard run on fourth and goal from the five fell just short.

Both offenses finally showed a chink in their armor as they would trade punts to finish out the quarter.

The Panthers would finish strong, as they stropped a Trojan fake punt and Burleigh sealed the deal with his fourth TD pass, a 24-yard strike to Dayton Wood. Zaparzynski's two-point run would close the scoring at 44-33 with 6:44 left. Troy's last gasp ended with QB Isaac Havens sack on fourth and 20.

Burleigh set a school record in both passing yards and touchdowns, while Luke Kelly had six catches for 171 yards and a score.

Dionte Jones had 14 carries for 175 yards and two scores.

Next week the Panthers play at Canton while Troy travels to Towanda.