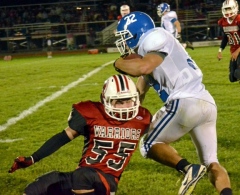 CANTON - The Canton Warriors went toe to toe for a whole quarter vs. the favored South Williamsport Mounties in last night's home opener, battling to a scoreless tie after 12 minutes.

But in the end, South's standout senior tailback Dominick Bragalone would wear them down, scoring 5 touchdowns en route to a 46-7 win.

"Hats off to Canton, they came out and played tough early," said South Williamsport head coach Chris Eiswerth. "Our kids finally settled down, Dominick broke off a couple big runs, and we were able to turn it up a notch when we needed to."

Both teams came out moving the ball well, as South was able to take their second possession deep into Warrior territory. But on second and goal from the 9, Q.B. Matt Boone was intercepted by Mason Moore to end the threat.

Canton would respond with an impressive drive of their own, traveling 78 yards in 10 plays. But on second and 3 from the Mountie 17, Q.B. Trevor Route turned the ball over, ending their chance to grab an early lead.

South would take advantage, with FB John Peters and Boone taking turns gaining big chunks of yardage. Peters would finish the drive with an 18 yard burst for the score, putting his team up 6-0 with 11:17 left until the half.

Following a turnover on downs, Bragalone showed his talent as he fumbled a pitch, scooped it up on one bounce, and raced around the left end for a 60 yard score. Logan Wein added the PAT and the lead was 13-0 with 7:27 left.

The Warriors responded by marching to a first and goal at the 10 yard line, but were turned away on downs by a stingy Mountie defense.

South would need only 5 plays to up their lead, as they covered 82 yards highlighted by Bragalone runs of 9, 39, and 8 yards. His second TD run of the night came with 2:06 left until the half, making it 19-0.

Trevor Route would suffer his second fumble on the first play of their next drive, and South would again cash in. Bragalone showed off his receiving skills, lining up in the slot and torching the Warrior secondary for a 60 yard TD reception, sending his team to the locker room with a comfortable 26-0 lead.

Any hopes Canton had of climbing back into the game were quickly dashed, as their first drive of the second half included 2 fumbles and a penalty. A 4th down fumble on a punt attempt gave the Mounties the ball on the 20, where Moore quickly hooked up with Brock Jones on a scoring strike to make it 32-0 at the 10:19 mark.

It went from bad to worse for the Warriors as Noah Barnett's halfback option pass was picked off by Bragalone who again showcased his speed on an 80 yard interception return for the score. Wein's PAT made it 39-0 and the mercy rule clock began running.

Canton would finally get on the board when Route hooked up with Travis Butcher on a nifty 70 yard scoring strike.

South's final points came from Bragalone's fifth TD, a 13 yard run to make it 46-7. The remainder of the game saw a preview for Monday night's JV matchup as both teams substituted freely.