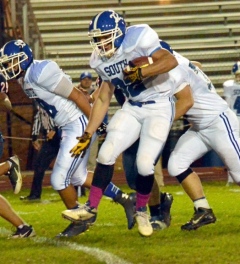 South quarterback Matt Boone also had a strong game, going 12-for-15 for 158 yards and two scores.

JP Harbst was Sayre's top stat getter, running for 82 yards on nine carries while also returning a kick-off for a touchdown.

Bragalone started the scoring with 9:43 left in the first quarter as he rushed for a 25-yard touchdown. After Logan Wein's kick South was up 7-0.

With 4:16 left in the opening quarter South's John Peters ran in a score from 11 yards out to make it 21-0 after the Wein point after.

Then at the start of the second quarter Bragalone scored on a 47-yard run to put South up 27-0.

Back to back 4-yard touchdown runs from Peters and Boone made it 41-0. The Mountaineers pushed that lead to 48-0 as Boone hit Riley Thomas for a 3-yard scoring strike.

Then with 2:14 left in the second quarter Harbst ran the kick-off 72 yards to pay dirt to cut the deficit to 48-8 as Matthew Ingrassia punched in the 2-point conversion.

Then just before the half Boone hit Thomas on a 22-yard scoring strike. After the Wein point after South led 55-8.

The Redskins got two scores in the fourth quarter.

First was a Tylor Belles 2-yard run with 8:33 left to play. Gavin Lundy-McCutcheon hit Harbst for the 2-point conversion to make it 55-16.

Then with 4:03 left to play Bradly Hatch ran in a touchdown from five yards out followed by Matthew Eberlin running in the point after to make it a 55-24 final.

For South Thomas had 10 catches for 146 yards while Boone also had an interception.