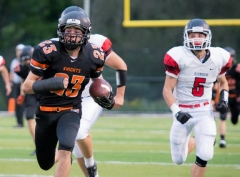 TOWANDA - The Black Knights headed into week three with one thing in mind: to win a football game.

Towanda put together an impressive defense, and along with the running ability of Steven Yates and Noah Huff, the Knights pulled away with a 56-12 win over the visiting Bloomsburg Panthers.

Yates and Huff took turns carrying the ball on their first possession after receiving the kick-off. Although the yardage gained by the two teammates was fairly impressive, the Knights wouldn't score until their third possession, when on 1st and goal at the five yard line, Yates would run in for the touchdown with 4:44 left in the first quarter. Tyler Basse would add the extra point, and Towanda would start the game off with a lead, 7-0.

Bloomsburg struggled with their offensive game, even from the beginning, and the Black Knights used this to their advantage as much as possible. After a 32 yard punt on the part of Bloomsburg's Lance Klingler, the Knights would set up shop on their own 38. A few Noah Huff passes and some Yates carries would then set up another first and goal for Towanda. With only seconds left on the clock before the first quarter ended, Noah Huff took the initiative and ran the ball in for another touchdown. Basse's extra point was again good, and the Knights extended their lead, 14-0.

The Panthers' next drive was weak, as they lost 13 yards on first and ten, and fumbled on 2nd and 23. Towanda would recover the fumble, giving them the ball on the Bloomsburg 4 yard line. The points added onto the scoreboard within the next seconds were almost too easy, as Dylan Bates jumped into the end zone on 2nd and goal for the effortless 1 yarder. Again, Basse's PAT was good, and Towanda now led 21-0 with 9:42 left before the half.

Bloomsburg could not respond positively to the Towanda offensive attack, so they continued to throw incomplete passes and rack up the penalty yards. Following yet another punt, the Knights were given the ball on their own 43. From there, Noah Huff would complete three passes (one of them for 40 yards), and the last of the three a touchdown pass to Landon Brown. Tyler Basse's extra point was solid, and with 6:34 left in the half, Towanda showed no mercy with the score now at 27-0.

As if this last play sparked some fire in the Panthers, they finally decided to answer back and give the Knights a taste of their own medicine. After a brilliant 53 yard pass from Nick Anderson to Mike Parker, Bloomsburg only had 21 yards to the end zone. On first and ten, Anderson would complete another pass, this time to Brandon Breisch, for the score. Lance Klingler's extra point attempt was wide left, but the Panthers were now on the board with 5:26 left in the half.

Towanda had no trouble reciprocating. The offensive game was on the ball all night long... literally. On the Black Knights' next drive, and on first and ten, Noah Huff would score again by running eleven yards into the end zone as the clock continued to tick away, leaving only 1:52 remaining in the second quarter. Basse continued to prove himself by making yet another extra point, and the Knights added 7 more points, making the scoreboard read 35-6.

On the next couple of possessions, both teams would struggle offensively trading punts, until Bloomsburg, on a Brandon Breisch interception for the 58 yard score, would add 6 more points to the board. The two-point conversion attempt would fail on an incomplete pass by Sam Miller, and Towanda would still keep the lead at 35-12 with 8:13 remaining in the third quarter.

This second score did not throw Towanda off their game. In fact, one could say that it enhanced their motivation. Huff, with his passing game on point, would throw another touchdown on third and fourteen to a diving Dylan Bates with the clock reading 5:47. Basse added the extra point, and the Knights extended their lead, 42-12.

Penalties were what hurt the Bloomsburg offense and defense alike for the majority of the night. Two flags against the Panthers on their next drive would make it easy for Towanda to get the ball back and set up on their own 21, but both teams would settle trading punts for the remainder of the third.

The next time the Knights scored would be with 7:51 remaining on the clock, and on a Keegan Kisner 1 yard run. Basse again added the PAT, and Towanda continued to lead, 49-12.

The final score of the night would come from another Kisner run, this time for two yards with 1:55 left in the game. Basse added the extra point and the final score was set, 56-12.

Next week, the Knights travel to Hughesville to take on the Spartans.