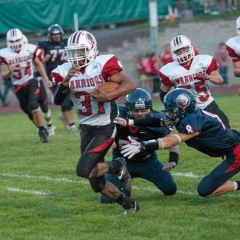 Barnett also had 21 carries for 158 yards and a score in the contest.

Quarterback Trevor Route was 4-for-9 with all his passes going to Barnett while Malachi Washington added five carries for 17 yards.

Sayre led off the scoring as Tyler Belles rushed for 18 yards to paydirt with 11:23 left in the opening half. After the extra point was good they led 7-0.

Less than two minutes later the Warriors answered as Route hit Barnett for a 68 yard scoring strike. The point after was no good but Canton cut the deficit to 7-6.

Then with 6:20 left before the half Barnett found the end zone again, running 22 yards to paydirt this time to give the Warriors a 12-7 lead.

Canton struck again in the third quarter as Route and Barnett hooked up again, this time for a 26 yard scoring strike to give the Warriors an 18-7 lead and the win.

Malachi Washington added 17 yards on the ground off carries for the winners.

Michael Ward was strong in the loss for the Redskins, rushing for 143 yards on 13 carries while Garrett Weaver had nine carries for 53 yards.

Marshall Felt was 4-for-13 for 25 yards and two picks for Sayre.