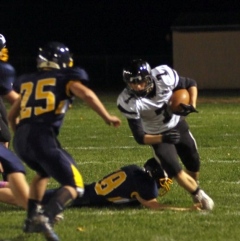 WESTFIELD - Athens, coming off a big win over Wyalusing, hoped to keep their winning ways rolling as they headed to Westfield to face Cowanesque Valley.

The Indians missed numerous opportunities to make the contest close and eventually fell to a 40-0 score. The Wildcats wasted no time in keeping the momentum on their side as Brandon Sturzenegger gave the Indians a raw deal on his 64-yard touchdown for a score with a run down the sideline on the second play of the game. Austin Lister added the PAT for an early seven-point lead.

Cowanesque Valley responded on the kickoff as Ethan Mead returned the ball to the 9 yard line. The Wildcat defense held tough and forced Mead to attempt a 28-yard field goal that fluttered to the left of the goal post.

Athens then turned to Sturzenegger, the Wildcats' running man, on the next series. Sturzenegger carried the ball seven times on the 12-play drive for 41 yards before scoring on a 3-yard run. Tyler Forbes narrowly missed scoring on the conversion attempt as he slid just outside of the left side pylon.

Cowanesque Valley responded with an 11-play drive with Mead carrying the ball seven times for 27 yards and Connor Calaman adding 20 yards on three carries. However, once again, the Wildcat defense tightened up in the red zone and stop the Indians on downs at the fifteen.

Athens took over and eventually faced a third-and-ten at the fifteen. Tyler Forbes converted on third down in a big way by hitting Kalen Keathley, who raced 85 yards for a touchdown. Lister added the extra point for a 20-0 margin just before the end of the half.

In the third quarter, the Wildcats stumbled as Sturzenegger fumbled the ball near midfield with Ben Brubaker recovering; however, the Wildcats controlled the collateral damage by forcing the Indians to punt after three downs that included a clean, powerful hit on quarterback Joey Brown by Roger Horton.

On Athens' next possession, Luke Newman fumbled on the first play at the 27-yard line and Cowanesque Valley moved to the seven before turning the ball over on downs again.

After a 9-yard punt, the Indians had the ball in great field position again only to be forced to punt after three plays.

Cowanesque Valley could do little to stop Sturzenegger on the next series as he carried the ball five times for 28 yards, including a one-yard dive for a touchdown. The Indians did block the extra-point.

Into the fourth quarter, the Wildcats made some substitutions, but the momentum continued with Payton Lewis bearing down on the Indians with consecutive runs of 10 and 18 yards as he shuffled into the end zone for a 33-0 lead.

A few minutes later, Lewis broke tackles up the middle before getting away with an 87-yard touchdown with just over a minute left in the game for the final tally.